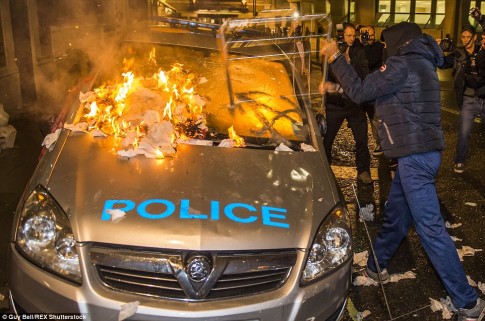 – Chaos on the streets of London: Million Mask March anarchist – in a £500 jacket – trashes police car as fireworks are aimed at horses in clashes outside Buckingham Palace and Hunger Games premiere:

Hundreds of anarchists were held back by police outside Buckingham Palace. They aimed fireworks at the police horses and also tried to dazzle them with laser pointers.

Another group targeted the UK premiere of the new Hunger Games film in Leicester Square, moments after Hollywood stars including Jennifer Lawrence and Julianne Moore had walked the red carpet.

Meanwhile, one anarchist was filmed smashing up a flaming police car – while wearing a Colmar ski jacket that cost around £475.

Elsewhere, officers were forced to brandish their batons after clashes turned violent as the vandals marauded through the streets, setting off smoke bombs and daubing graffiti. A total of 50 people have been arrested and at least three officers have been taken to hospital with injuries.

2 thoughts on “Chaos On The Streets Of London”