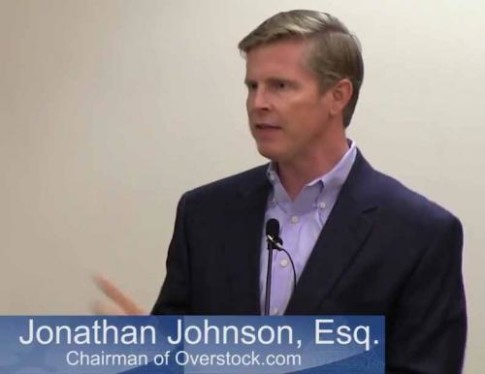 – How One Retailer Is Preparing For The Apocalypse:

Zero Hedge first revealed Overstock’s contingency plans “in preparation for the next collapse” ten days ago. Today, the strategy outlined by Overstock Chairman Jonathan Johnson has resonated across the Atlantic and this morning as the Financial Times catches up to the story of an “online retailer hoarding gold as crisis defense” in which it calls the retailer a “redoubt of doomsday conservatism” adding its policy to prepare for the loss of central-planning control is “redolent of the small band of US survivalists preparing for the end of civilisation.“

The FT reports that Jonathan Johnson, Overstock’s “anti-establishment leader”, told the Financial Times it has “stashed away $10m in gold and silver coins as an insurance policy against financial apocalypse” and that it keeps “precious metals outside the banking system so the company could pay employees even if lenders slammed shut in a crisis.”

Mr Johnson, who is running to be Utah governor, said Overstock also kept extra freeze-dried food so it had enough to feed each employee and one family member for three months.

“We thought there’s a decent chance that there could be a banking holiday at some point caused by a crisis and it could last for two days or two weeks or who knows how long, and we wanted to be in a position where we could continue to operate during any such crisis,” he said.

Overstock’s gold stash will resonate with libertarian conservatives who distrust the Federal Reserve and Wall Street and view gold as a refuge from government attempts to inflate and control the economy.

According to the FT, Overstock’s stockpile “makes up about 10 per cent of the company’s liquid assets.”

The Nikkei’s most recent media acquisition also notes that in an “act of rebellion against financial convention”, Patrick Byrne, its chief executive, “is a strident libertarian who champions bitcoin, the virtual currency, and its immunity from government money-printing.”

Well, if the company had converted all of its fiat currency in bitcoin two months ago, it would have doubled in value as of yesterday now that the predicted Chinese exodus into the digital currency has been unleashed.

Mr Johnson said Overstock’s board had approved its accumulation of gold and silver after the last financial crisis when the Fed’s policy of quantitative easing, which he called dangerously “irresponsible”, was in full swing.

So with the Fed jawboning for a rate hike, and ZIRP expected to end in 6 weeks (the way it “ended” in Japan in August 2000), has Overstock’s gloomy outlook changed? Not at all: “On the bullion hoarding policy, he said: “It was put in place during quantitative easing. It’s in place now and we don’t see a reason to change it.”

“Gold is just one of the financial contingency plans that Overstock puts in place,” he said. “We also have contingencies if sales don’t come in as expected.”

“Overstock’s policy is redolent of the small band of US survivalists preparing for the end of civilisation, but Mr Johnson said he himself was not a “prepper”.

We’ll spare judgment on Overstock’s policy and Johnson’s “prepperness” since the final chapter of the financial crisis – namely the so-called unwind of emergency measures – has yet to be written.

Finally for those who missed it and who would rather make up their own mind about the strategy, here are the key highlights from Johnson’s speech presented first here in late October:

So what do we do as a business so that we would be prepared when that happens. One thing that we do that is fairly unique: we have about $10 million in gold, mostly the small button-sized coins, that we keep outside of the banking system. We expect that when there is a financial crisis there will be a banking holiday. I don’t know if it will be 2 days, or 2 weeks, or 2 months. We have $10 million in gold and silver in denominations small enough that we can use for payroll. We want to be able to keep our employees paid, safe and our site up and running during a financial crisis.

We also happen to have three months of food supply for every employee that we can live on.

His full presentation before the UPMA is below: