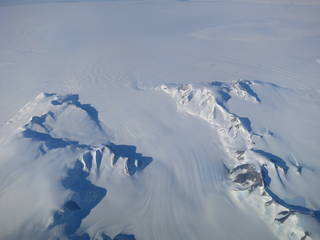 It’s hard to comprehend how much ice that really is, so let’s put it in perspective.

Those old Beetles measured 14 feet long.  Multiply 112 billion by 14 feet and you get 1,560 billion feet. Divide that by the distance from the earth to the moon (239,000 miles),  and you’d have a string of VW Beetles stretching all the way to the moon.

That’s a helluva lot of new ice. Every single year. And we’re worried about global warming?

Not only is the Antarctic Ice Sheet growing, NASA admits that the growth is actually reducing sea-level rise. This also confirms what I’ve been saying all along.

A new NASA study says that an increase in Antarctic snow accumulation that began 10,000 years ago is currently adding enough ice to the continent to outweigh the increased losses from its thinning glaciers.

The research challenges the conclusions of other studies, including the Intergovernmental Panel on Climate Change’s (IPCC) 2013 report, which says that Antarctica is overall losing land ice.

“We’re essentially in agreement with other studies that show an increase in ice discharge in the Antarctic Peninsula and the Thwaites and Pine Island region of West Antarctica,” said Jay Zwally, a glaciologist with NASA Goddard Space Flight Center in Greenbelt, Maryland, and lead author of the study, which was published on Oct. 30 in the Journal of Glaciology. “Our main disagreement is for East Antarctica and the interior of West Antarctica – there, we see an ice gain that exceeds the losses in the other areas.”  Zwally added that his team “measured small height changes over large areas, as well as the large changes observed over smaller areas.”

Scientists calculate how much the ice sheet is growing or shrinking from the changes in surface height that are measured by the satellite altimeters. In locations where the amount of new snowfall accumulating on an ice sheet is not equal to the ice flow downward and outward to the ocean, the surface height changes and the ice-sheet mass grows or shrinks.

The study analyzed changes in the surface height of the Antarctic ice sheet measured by radar altimeters on two European Space Agency European Remote Sensing (ERS) satellites, spanning from 1992 to 2001, and by the laser altimeter on NASA’s Ice, Cloud, and land Elevation Satellite (ICESat) from 2003 to 2008.

The extra snowfall that began 10,000 years ago has been slowly accumulating on the ice sheet and compacting into solid ice over millennia, thickening the ice in East Antarctica and the interior of West Antarctica by an average of 0.7 inches (1.7 centimeters) per year.

“The good news is that Antarctica is not currently contributing to sea level rise, but is taking 0.23 millimeters per year away,” Zwally said.

Abstract of the paper from the Journal of Glaciology:
http://www.ingentaconnect.com/content/igsoc/jog/pre-prints/content-ings_jog_15j071;jsessionid=pi1c23u2cqo4.alexandra

And here are a few if my previous articles on this subject: