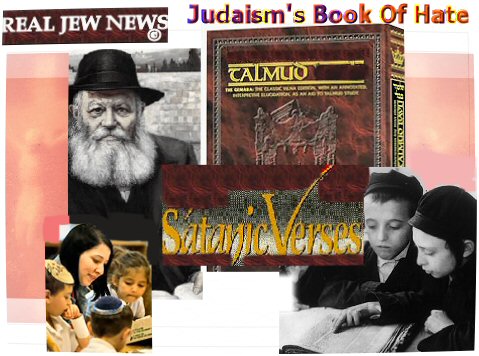 THE JEWISH TALMUD is “Holy Writ” for the Jews.

* “Girls born of the ‘goyim’ are in a state of ‘niddah’ (menstrual uncleanness!) from birth.” (Abodah Zarah 36b)
SATANIC VERSES OF THE TALMUD’S
HATRED TOWARDS THE GENTILES

* “When it comes to a Gentile in peace times, one may harm him indirectly, for instance, by removing a ladder after he had fallen into a crevice.” (Shulkan Arukh, Yoreh De ‘ah, 158, Hebrew Edition only)
SATANIC VERSES OF THE TALMUD’S
BLASPHEMIES AGAINST JESUS CHRIST, THE VIRGIN MARY,
& ALL CHRISTIANS