Late last year, a very important and very “powerful” man took a field trip to Japan to observe Keynesian insanity prowling around in its natural habitat… 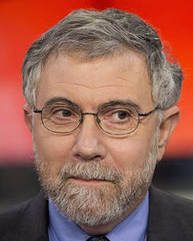 That’s right, last November Paul Krugman – the mere mention of whom is enough to strike terror in the hearts and minds of the sane – found himself in a limousine with Japanese economist Etsuro Honda who was intent on securing the Nobel laureate’s help in convincing Prime Minister Shinzo Abe to delay a planned (and prudent) sales tax hike. As a reminder, here’s how Bloomberg described the “historic” series of events:

When Japanese economist Etsuro Honda heard that Paul Krugman was planning a visit to Tokyo, he saw an opportunity to seize the advantage in Japan’s sales-tax debate.

With a December deadline approaching, Prime Minister Shinzo Abe was considering whether to go ahead with a 2015 boost to the consumption levy. Evidence was mounting that the world’s third-largest economy was struggling to shake off the blow from raising the rate in April, which had triggered Japan’s deepest quarterly contraction since the global credit crisis.

Honda, 59, an academic who’s known Abe, 60, for three decades and serves as an economic adviser to the prime minister, had opposed the April move and was telling him to delay the next one. Enter Krugman, the Nobel laureate who had been writing columns on why a postponement was needed.

It was in a limousine ride from the Imperial Hotel that Honda told Krugman, 61, what was at stake for the meeting. The economist, who’s now heading to the City University of New York from Princeton University, had the chance to help convince the prime minister that he had to put off the 2015 increase.

The concept of outside opinion influencing Japanese decision-making is known as gaiatsu, or foreign pressure, in Japanese, and has historical precedent since at least the arrival of U.S. Commodore Matthew Perry’s squadron in 1853 in Tokyo Bay, which led to an opening in the nation’s trade policies. Gaiatsu also has been used as cover by Japanese officials when they’ve pushed through controversial measures.

Krugman plays down his role, saying the Nov. 6 meeting with Abe “was very straightforward.”

But Honda tells a different story:

“That nailed Abe’s decision — Krugman was Krugman, he was so powerful.”

Yes, “Krugman was Krugman,” which means everyone in attendance was subjected to 40 minutes of crisply-worded nonsense and unlike Deputy Riksbank Governor Per Jansson – who, earlier this year, suggested that Krugman “write fewer articles and have more of a look at the data” after Krugman essentially accused Sweden’s central bank of being an evil cabal of job-hating heretics motivated by an overwhelming (not to mention completely inexplicable) desire to perpetuate global inequality by enriching creditors at the expense of impoverished debtors – no one had the good sense to tell him to shut up.

Sure enough, the tax hike was delayed.

Just days earlier, Krugman penned the following laughably ridiculous words in a blog post explaining why Japan should avoid doing anything that could be mistaken for a rollback of Abenomics:

When I see, say, the IMF inserting into its latest Japan survey a section titled “Maintaining focus on fiscal sustainability” my heart sinks (and so, maybe, does Abenomics); [even though] it’s hard to argue against sustainability.

It sure is, but Krugman will do it and powerful people will unfortunately listen and by the time everyone realizes that efforts to micromanage economic outcomes and smooth out the business cycle by cranking up the printing presses and gluing rates to the zero lower bound have failed it will be far, far too late to normalize which of course is precisely what’s unfolding across the world today.

We retold the story presented above because on Thursday a very funny thing happened: Paul Krugman told an audience in Tokyo that he is “really, really worried” that Abenomics might fail. Here’s Bloomberg:

“I’m still really, really worried,” Krugman said at a conference in Tokyo on Wednesday. A big problem remains building enough momentum in the economy to escape deflation, he said.

“Japan has spent a long time in this deflationary trouble,” said Krugman, who helped convince Abe to delay another planned increase in the nation’s sales tax after a hike in April last year pushed the world’s third-biggest economy into a recession.

Japan needs to reach a point where everyone believes that it has pulled out of deflation, he said. “And then if that can be believed, then it may be able to stay out of trouble thereafter,” he said.

Reading that, we’re reminded of BoJ cheif Haruhiko Kuroda, who, back in June, hilariously likened himself and his fellow DM central bankers to Peter Pan when he said the following about what’s needed to perpetuate the central bank omnipotence myth:

“I trust that many of you are familiar with the story of Peter Pan, in which it says, ‘the moment you doubt whether you can fly, you cease forever to be able to do it.’ Yes, what we need is a positive attitude and conviction.”

What Krugman and Pan are both tacitly admitting, is that Abenomics has demonstrably failed and the only thing that can save Japan now is for everyone to suspend disbelief in the face of voluminous evidence that what Kuroda and Abe (at Krugman’s behest) are doing simply isn’t working.

And because “Krugman is Krugman”, we’re never more than one Google search away from a hilarious soundbite from the New York Times blog archives, and so it’s with great pleasure and with everything said above in mind, that we leave you with the following excerpt from a Krugman classic entitled “Why Keynes Is Slowing Winning” ca. 2014:

“Why does the tide finally seem to be turning? Partly, I think, it’s just a matter of time; after six years it’s becoming hard not to notice that the anti-Keynesians have been wrong about everything. And the refusal of almost everyone on the anti-Keynesian side to admit any kind of error has gradually made them look ridiculous.” 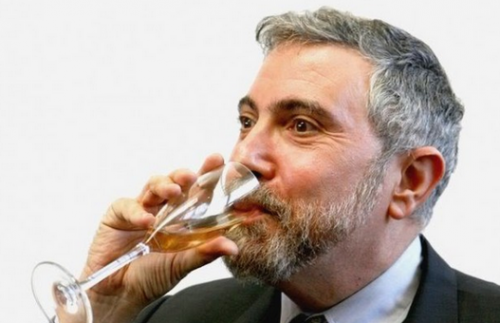