The narrative of the omnipotent central banker continues to be questioned with China’s inability to save its own market the latest incarnation of investors losing faith. Nowhere has the religious zealotry been more fervent than in trading Japanese stocks where Abe and Kuroda have broken every independent rule in their manipulation of wealth-giving stocks. However – it appears their time is up, as Bloomberg reports, foreigners dumped 1.43 trillion yen of Japanese equities in the three weeks through Aug. 28, Tokyo Stock Exchange data updated Thursday show. That’s the most for any three-week span on record, overtaking the period when Bear Stearns Cos. collapsed in 2008.

Global investors are pulling money out of Japan’s equity market at the fastest pace since at least 2004, according to Mizuho Securities Co. As Bloomberg details,

Foreigners last week sold a net 1.85 trillion yen ($15.4 billion) of Japanese stocks and equity index futures, the biggest combined outflow since Mizuho began tracking the data more than a decade ago, said Yutaka Miura, a Tokyo-based senior technical analyst at the brokerage. Investors are fleeing amid concern about China’s economic outlook and the prospect of higher interest rates in the U.S., he said.

“This is a result of investors dumping global risk assets,” said Miura. “Japanese stocks have performed well since the start of the year, so similar to what’s happening in Europe, we’re seeing people take profits.”

Foreigners dumped 1.43 trillion yen of Japanese equities in the three weeks through Aug. 28, Tokyo Stock Exchange data updated Thursday show. That’s the most for any three-week span on record, overtaking the period when Bear Stearns Cos. collapsed in 2008. 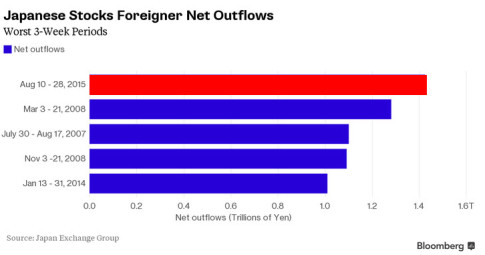 As one local broker noted,

“The sell-off started in China,” Clarke said. “Investors couldn’t sell there in the end so selling spread to Asia, and Japan especially as it has a greater liquidity. This eventually spread to Europe and the U.S.”