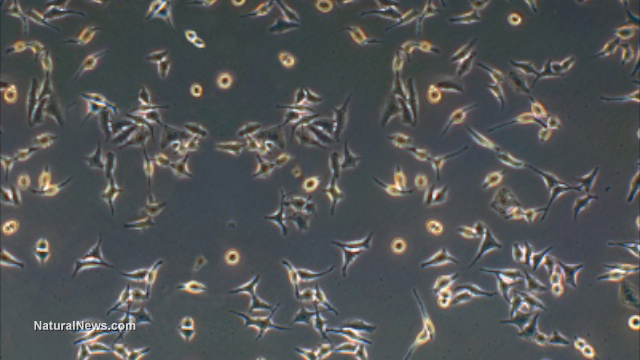 As you’ll notice in the above video, GcMAF serves as the energized mechanism for macrophages to target and eliminate breast cancer cells. The incredible mechanistic action of this substance is shown in amazing clarity, and is further described in an associated paper entitled “Multifaceted immunotherapeutic effects of GcMAF on human breast cancer cells.”

“Time lapse photography over 60 hours shows the cancer monolayer … first changing from corrugated to smooth … as the cancer is destroyed,” reveals First Immune. “[T]hen the cancer ‘fingers’ are also eaten and destroyed by the macrophages.”

Holistic doctors ‘suicided’ over GcMAF, which threatens to put cancer industry out of business

Short for Globulin component Macrophage Activating Factor, GcMAF just so happened to be the primary focus of research being conducted by Dr. Jeff Bradstreet, M.D., a Florida doctor who was found floating dead in a river back in June. His sudden death was immediately ruled a suicide, even though he had a gunshot wound to the chest, suggesting he was murdered.

Dr. Bradstreet’s “suicide” was just one of about seven others that occurred all around the same time, and all within the holistic healing community. Dr. Bradstreet and his other now-dead colleagues had all been involved in research focused on GcMAF’s potential as both a treatment and cure for cancer, and one that doesn’t produce deadly side effects like conventional cancer treatments do.

GcMAF doesn’t actually cure cancer, of course — it merely provides the ammunition needed by the body’s own immune system to eradicate and cure cancer itself, naturally. And this represents a threat to the pharmaceutical industry, which profits to the tune of billions of dollars annually peddling quackery like chemotherapy and radiation, both of which have been shown to cause more cancer.

“GcMAF and/or oral Colostrum MAF macrophage activation therapy is indicated in the treatment of any diseases where there is immune dysfunction or where the immune system is compromised,” explains the website of a clinic out of Japan that sells an oral form of GcMAF.

Besides cancer, the conditions listed as appropriate candidates for GcMAF treatment include:

Read about other anti-cancer treatments from the independent media at AntiCancer.news

You can also do your own research on other types of cancer treatments at TruthWiki.org