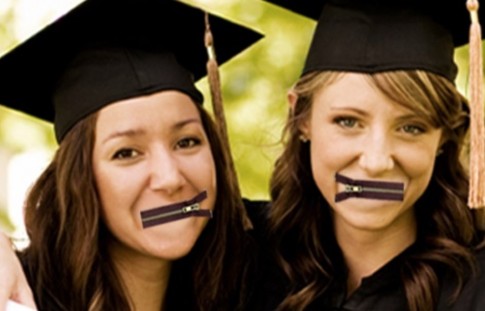 – Rutgers University Warns Students – “There is No Such Thing as Free Speech” (Liberty Blitzkrieg, Aug 26, 2015):

Ironically, U.S. college campuses are rapidly becoming the least free, most censored places in the country. Many people have commented on this, including high profile, enormously talented comedians such as Chris Rock and Jerry Seinfeld. In fact, Chris Rock was so appalled that he stopped playing colleges because audiences had become “too conservative” Before getting all bent out of shape, this is what he meant:

Not in their political views — not like they’re voting Republican — but in their social views and their willingness not to offend anybody. Kids raised on a culture of “We’re not going to keep score in the game because we don’t want anybody to lose.” Or just ignoring race to a fault. You can’t say “the black kid over there.” No, it’s “the guy with the red shoes.” You can’t even be offensive on your way to being inoffensive.

Although I’ve touched upon this subject before, I haven’t given it nearly the amount of attention it deserves. That said, I would suggest rereading a powerful post published earlier this summer, A Professor Speaks Out – How Coddled, Hyper Sensitive Undergrads are Ruining College Learning. Here’s an excerpt:

Things have changed since I started teaching. The vibe is different. I wish there were a less blunt way to put this, but my students sometimes scare me — particularly the liberal ones.

I once saw an adjunct not get his contract renewed after students complained that he exposed them to “offensive” texts written by Edward Said and Mark Twain. His response, that the texts were meant to be a little upsetting, only fueled the students’ ire and sealed his fate.  That was enough to get me to comb through my syllabi and cut out anything I could see upsetting a coddled undergrad, texts ranging from Upton Sinclair to Maureen Tkacik — and I wasn’t the only one who made adjustments, either.

The current student-teacher dynamic has been shaped by a large confluence of factors, and perhaps the most important of these is the manner in which cultural studies and social justice writers have comported themselves in popular media. I have a great deal of respect for both of these fields, but their manifestations online, their desire to democratize complex fields of study by making them as digestible as a TGIF sitcom, has led to adoption of a totalizing, simplistic, unworkable, and ultimately stifling conception of social justice. The simplicity and absolutism of this conception has combined with the precarity of academic jobs to create higher ed’s current climate of fear, a heavily policed discourse of semantic sensitivity in which safety and comfort have become the ends and the means of the college experience.

Moving along to today’s post, I want to highlight two different stories that I came across today demonstrating just how far “higher education” has cratered in recent years. First, let’s turn to Rutgers University, whose “Bias Prevention & Education Committee (BPEC)” recently put out an alert that began with the following statement:

Really, since when? I think a little document called the Constitution of the United States of America might have a different opinion.

Of course, as soon as this became publicized, the school removed that language. Reason reports that:

Rutgers University students, you are being watched.

That appears to be the message a Rutgers.edu web page would like the campus community to absorb. The web page is maintained by the Bias Prevention & Education Committee, which chillingly warns students that there is “no such thing as ‘free’ speech,” and to “think before you speak.” From the web page:

Since 1992, the Bias Prevention Committee has monitored the New Brunswick/Piscataway campus for bias incidents and has provided bias prevention education to staff, students, and faculty. …

If you experience or witness an act of bias or hate, report it to someone in authority. You may file a report on line at www.bias.rutgers.edu and you will be contacted within 24 hours.

Rutgers defines bias so broadly that all kinds of clearly protected speech would likely trigger an incident report and subsequent investigation by this Orwellian committee.

I suppose this means that administrators recently reviewed the page, and stand by the rest of its claims.

Of course, this is far from a one-off incident. This is becoming systemic at universities from sea to shining sea. The good news is that some people have had enough and are speaking out. One brave example is Alice Dreger, who just very publicly resigned from Northwestern University protesting the schools’ censorship. We learn from the Chronicle of Higher Education that:

Alice Dreger doesn’t usually pull punches. So it’s no surprise that her resignation letter is more, shall we say, direct than the average two weeks’ notice.

Ms. Dreger resigned this week from Northwestern University, where she was a clinical professor of medical humanities and bioethics, a nontenured gig she’d had for the past decade. In her letter, she writes that when she started at Northwestern, the university vigorously defended her academic freedom. Now, she contends, that’s no longer the case.

What prompted her departure was the fallout over an article by William Peace, who at the time was a visiting professor in the humanities at Syracuse University. Mr. Peace wrote an essay for an issue of the journal, Atrium, that Ms. Dreger guest-edited. The essay is a frank account of a nurse who helped Mr. Peace regain his sexual function after he was paralyzed.

According to Ms. Dreger, Eric G. Neilson, vice president for medical affairs and dean of the university’s school of medicine, tried to censor portions of the essay deemed too explicit. The essay is straightforward in its description of sex, and includes multiple mentions of “the dick police,” but the purpose is to illuminate what went on in the era prior to disability rights and studies.

In her letter, Ms. Dreger writes that the university allowed the essay to be published online only after she and Mr. Peace threatened to talk publicly about what they saw as censorship. She writes that she was “disgusted that the fear of bad publicity was apparently the only thing that could move this institution to stop censorship.”

She asked the university to acknowledge that attempting to remove portions of the essay was a mistake and to promise not to do so in the future. “They never acknowledged that the censorship was real,” Ms. Dreger said in an interview. “I wanted a concrete acknowledgment and assurance that my work would not be subject to monitoring.” That, she said, would have been enough for her to remain.

The idea that institutions must acknowledge wrongdoing is central to Ms. Dreger’s academic work. It’s a theme of her recent book Galileo’s Middle Finger: Heretics, Activists, and the Search for Justice in Science, which takes to task organizations that try to stifle academic freedom or single out scholars for their provocative views.

“The idea that institutions must acknowledge wrongdoing is central to Ms. Dreger’s academic work.”

BINGO. This is so essentially to a functioning, ethical society, and is something that never happens in modern America. Ever.

In case you doubt the firebrand that is Ms. Dreger, here’s an sample of one of her tweets from earlier today:

Could everybody stop calling me a bioethicist? If I were one I’d be whoring for the medical industrial complex. I’m a historian. And moral.