This is just a quick-hitter post on another former leader that is breaking down. As we have mentioned several times – in particular on July 22 and August 5 – the ever-thinning stock market rally is starting to lose the relatively few leaders still keeping it afloat. That July post noted the relative weakness in the equal-weight Nasdaq 100, even as the cap-weighted index remained near its highs. One reason was the performance of Apple Inc. (AAPL), the largest stock in the index, and the entire U.S. market. When AAPL is moving higher, it can mask a lot of problems in the broader market. Unfortunately for bulls, AAPL is beginning to crack. It began on the day of the July post when it got crushed following its earnings release. It has since broken down more, recently dropping below its post-2009 UP trendline. 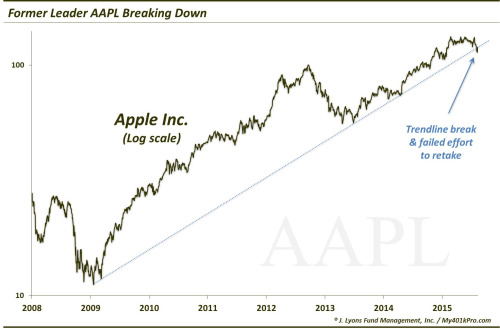 As the chart indicates, we are using a logarithmic scale. AAPL prices held the trendline in 2013 and 2014 but broke below just last week. Yesterday, the stock tried to retake the trendline – but it failed miserably, losing over 5% today.

For a market reasonably close to its 52-week high that has exhibited an almost unprecedented deterioration in breadth, it can ill-afford to lose the few leaders it has left – especially one rotten apple that just so happens to be the largest stock in the world.