And the big reset is coming.

I would protect my assets by owning physical gold and silver (outside the banking system).

This is not about short term gain, this is part of the strategy to survive the coming total financial collapse.

That said, I believe the gold bugs will be proven right and at one point, both gold and silver prices, will jump to unknown heights.

Full interview with Stephen Schork after the jump: 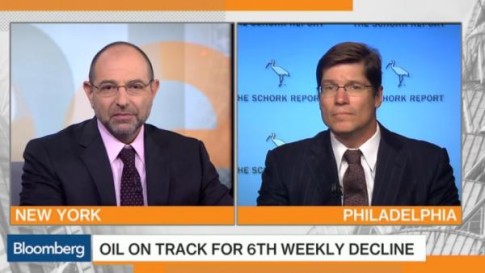 – Stephen Schork: The Commodity Crash Is “A Canary In The Coal Mine For The Global Economy” (ZeroHedge, Aug 8, 2015):

The best thing about the commodity crash relapse taking place so quickly after the last swoon – recall tha we have had two oil bear markets within 8 months – is that all those hollow chatterboxes and econo-tourists who swore that tumbling oil is “unambiguously good” and “great for the economy” (first and foremost Larry Kudlow and then proceeding with every single sellside strategist and economissed), have been laughed out of even CNBC’s studio, and are nowhere to be found this time around because not only did all those promises of a surge in consumer spending never materialize (for reasons, or rather one reasonwhich we explained extensively before), but the observent public still remembers all too well how countless ‘experts’ confusing cause (a gobal slowdown in the economy) with effect (crashing commodities).

Therefore, we were delighted when someone who actually understands the energy market for a change, The Schork Report’s Stephen Schork, appeared on BBG’s Pimm Fox yesterday to explain not only what the immediate future holds for both oil and gasoline prices, but why, when one actually gets cause and effect right, “this drop in oil prices, this drop industrial metal prices, this is not good. It’s a canary in the coal mine that something is not right in the global economy, and that is a concern for us all.“

The full interview is below, here are the key spot-on highlights, first about the futures of commodity prices :

… from a demand perspective on the seasonal front, it’s August 7. We only have four more weeks left of summer driving, then the peak gasoline season is over. Then we head into the fall where the fall turnaround; that is the refinery maintenance season begins. So refineries will scale back in their crude oil purchases. So right now we are at the peak of the demand season. Demand is only going to fall between now and the end of the year.

Then a repeat of what we first explained in “It’s Official: Americans Spent All Their “Gas Savings” On Obamacare”

FOX: All right. So, Stephen, let’s say that gasoline ends up being around $2.00, $2.10 a gallon by the end of the year, that extra money that people are not spending on gasoline, going to go somewhere else?

And so that’s the big misnomer here, Pimm. People tend to think that this pullback at the pump is somehow good. No. It’s a zero sum game because, yes, those dollars are being spent elsewhere, but those are not additional dollars being spent elsewhere. We’re just moving the pieces around on the chessboard. We’re not creating economic growth.

Putting it all together:

So there are a lot of telltales out there that this drop in oil prices, this drop industrial metal prices, this is not good. It’s a canary in the coal mine that something is not right in the global economy, Pimm. And that is a concern for us all.