Greece’s cash crunch hit small merchants first. They are less able to get credit from their suppliers, especially those dealing in perishable products that are continually imported. Christos Georgiopoulos owns a gourmet supermarket in Plaka, a picturesque Athens neighborhood frequented by tourists. He sells Champagne and Russian crab legs.

Nobody is buying. “I haven’t had a single customer in two days,” he said Wednesday. He is shutting down his shop and says he doesn’t know when he will reopen. He gave some crab legs to his workers and is taking some home. “I haven’t paid my staff and don’t know if and when I will,” he added.

And then there was this rather disconcerting commentary from AFP:

Greece’s dive into financial uncertainty is forcing struggling businesses to take unusual steps to survive, including hoarding euros in cash.

Businesses which import their raw materials have been the hardest hit, says Vassilis Korkidis, head of the National Confederation of Hellenic Commerce (ESEE).

As unease spreads, getting ones hands on cash has become a sort of national sport, with businesses from restaurants to car mechanics telling customers paying by card is no longer an option.

The inevitable result of the above is that banks’ already stratospheric NPLs are set to rise further meaning that with each passing day, the banking sector’s recapitalization needs grow as the economy sinks further into depression.

Perhaps now that the “Quadriga” (the new moniker for Athens’ creditors which was ostensibly adopted to reflect the fact that there are now four institutions involved rather than three but which incidentally conjures images of the triumphant statue atop the Brandenburg Gate in Berlin) has touched down in Athens, creditors’ “technical teams” will get a good hard look at what happens when you force deep fiscal retrenchment on a country whose economy is collapsing and then rub salt in the wound by cutting off liquidity and enforcing capital controls.

Here’s some color on just how dire the economic situation has become, via Kathimerini:

Turnover in retail commerce is posting an annual drop that in some cases amounts to 70 percent even though the market is in a sales period. Capital controls have prevented Greek consumers from shopping, while even foreign tourists appear reserved due to the increased uncertainty on developments in Greece.

An extraordinary meeting of the board of the Hellenic Confederation of Commerce and Entrepreneurship (ESEE) on Monday heard data from representatives of local associations that pointed to an annual drop of between 40 and 70 percent since the capital controls were imposed.

In Athens, the decline came to 40 percent, while in markets outside the city center it was even greater. Thessaloniki and Piraeus reported a 60 percent fall and Trikala, in central Greece, a 60-70 percent shrinking. Even tourism hotspots such as Rhodes had a 50 percent decline in turnover. 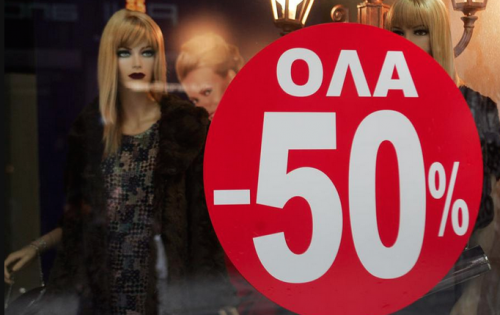 And a bit more from Greek Reporter:

The Athens Medical Association (ISA) warned about major shortages in medical staff over the next years, since an increasing number of Greek doctors, especially those working in highly specialized fields, and nurses are looking for jobs abroad and leaving the country.

According to the association’s figures, more than 7,500 doctors have migrated to other countries since 2010. It was reported that in the first six months of 2015, ISA issued 790 certificates of competence, an official document required for medical sector employees who wish to work abroad. However, the report also noted that up until 2009, on average, 550 doctor were taking jobs abroad each year.

“One of the biggest losses in the crisis has been that of great minds,” ISA chief Giorgos Patoulis stated to Greek newspaper Kathimerini. “In a short time, the national healthcare system will have an aged personnel and will be unable to staff services.”

Furthermore, the data showed that a total of 8,000 unemployed Greeks have been forced to look for job opportunities abroad. The Greek Nurses Union announced that it issued 349 certificates just last year, 357 in 2012 and 74 certificates in 2010.

And don’t expect this situation to improve any time soon because despite the passage of two sets of prior bailout measures, still more austerity will need to be pushed through the Greek parliament if Athens hopes to activate bailout funds by August 20, in time to make a €3.2 billion payment to the ECB. Here’s Reuters:

“More reforms are expected from the Greek authorities to allow for a swift disbursement under the ESM. This is also what is being discussed right now,” [and EU Commission spokesperson] said.

The banks have reopened after the ECB increased emergency funding but capital controls remain in place. Doubts persist about whether a severely weakened Greek economy can support another programme after a six-year slump that has cut output by a quarter and sent unemployment over 25 percent.

Among politically sensitive measures held back from the initial package were curbs on early retirement and changes in the taxation of farmers to close loopholes that are highly costly for the Greek state. A source close to the talks said these reforms were expected to be enacted by mid-August.

However, touching pensions is sensitive with Tsipras’s left-wing Syriza party, which has already suffered a substantial revolt over the Brussels agreement, and the main opposition New Democracy party opposes ending tax breaks for farmers.

In other words, Tsipras is about to go back to parliament and attempt to pass a third set of prior actions that will further imperil Greeks’ ability to spend, and he must do so quickly because if creditors aren’t satisfied with the progress by August 18, then paying the ECB won’t be possible and then it’s either tap the remainder of the funds in the EFSM (which would require still more discussions with the UK and other decidedly unwilling non-euro states) or risk losing ELA which would trigger the complete collapse of not only the economy but the banking sector and then, in short order, the government.

And through it all, Tsipras is attempting to beat back a Syriza rebellion (which will only be exacerbated by the upcoming vote on the third set of measures) while convincing the opposition that he’s not secretly backing the very same Syriza rebels in their attempts to forcibly take the country back to the drachma.

The only real question at this point is whether Greece can possibly navigate the next several months without descending into outright chaos, politically, economically, and socially. 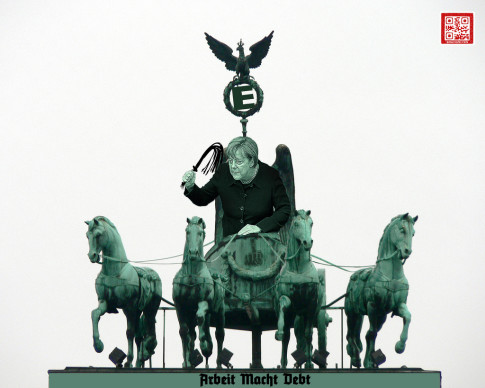