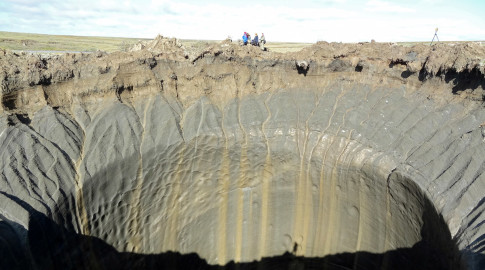 The origin of giant sinkhole craters in Siberia has prompted dozens of wild theories, from meteorites to UFOs. An RT documentary has traveled to the region to try and lift the veil behind the mystery.

Looking inside the mystery holes in the Russian Yamal peninsula is an experience of a lifetime, according to RT documentary correspondent Vitaly Buzuev. The largest of the craters, discovered a year ago, is 60 meters deep.

“I was really shocked when I saw these holes for the first time. It’s the biggest hole in Yamal, and you could put a 25-storey building inside it,” Buzuev said.

The natives aren’t looking for scientific explanations of the holes’ origin, Buzuev said. They prefer to believe the craters have a “connection to another world.”

“Everybody who lives there and nomads roaming through the tundra need to hear the voice of the Earth. So they believe that something extraordinary happened, and there’s no explanation,” he added.

The scientists, as usual, have quite a prosaic explanation. They point to the fact that the sinkholes emerged in a gas-rich location. Russia’s energy giant Gazprom is working its gas field not far away

“I believe gas is the unique cause of these phenomena, because the gas, thanks to gravity, tries to come to the surface, searches for fractures and cracks, and goes through to the surface,” Vasily Bogoyavlensky, head of the geological and geophysical lab working on site, told RT.

However, one mystery remains, even for the scientists: the question of why the holes are perfectly round. What’s more, dozens of smaller sinkholes have been discovered around the giant ones.

The massive craters were discovered in 2014 by helicopter pilots 30 kilometers from Bovanenkovo, in the Yamalo-Nenets region in Siberia.

The Russian Center of Arctic Exploration was the first to climb down into the crater last November.

3 thoughts on “‘You can put a 25-storey building in there’: RT peeks inside mysterious Siberian craters (VIDEO)”