– Greece Has Spent A Half-Century In Default Or Restructuring (ZeroHedge, July 3, 2015):

On Thursday, we highlighted the pitiable plight of Greek businesses which, facing an acute cash crunch and suppliers unwilling to provide credit ahead of the country’s weekend referendum, are being forced to close the doors.

The country’s banks are set to run out of physical banknotes “in a matter of days” according to a “person familiar with the situation” who spoke to WSJ and Constantine Michalos, the president of the Athens Chamber of Commerce, fears the country’s stock of imported goods will only last for two or three more weeks.

Meanwhile, Greeks have resorted to scavenging for food and picking through dustbins for scrap metal and as we noted on Wednesday, this is hardly a recent development in Greece. High unemployment has plagued the country for years , becoming endemic and relegating many Greeks to a life of perpetual and severe economic hardship.

Indeed, as BofAML notes, a look back at the country’s history shows that Athens has been in default or some manner of debt rescheduling for nearly a quarter of the past two centuries. 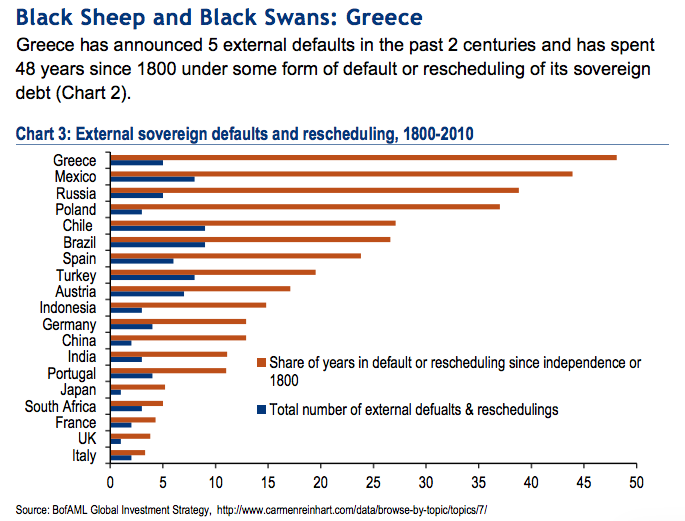 The bank goes on to make a rather unflattering comparison between the implied market cap of Greek stocks on Monday and a certain US-based bath towel supplier: “The announcement of a bank holiday & capital controls caused a 20% drop in the local equity market (as implied by ETFs), putting the market cap of MSCI Greece on a par with that of Bed, Bath & Beyond.”

But Athenians are in no mood for backhanded humor, because as one 83-year old told WSJ this week, “Tsipras has turned this country into North Korea.”