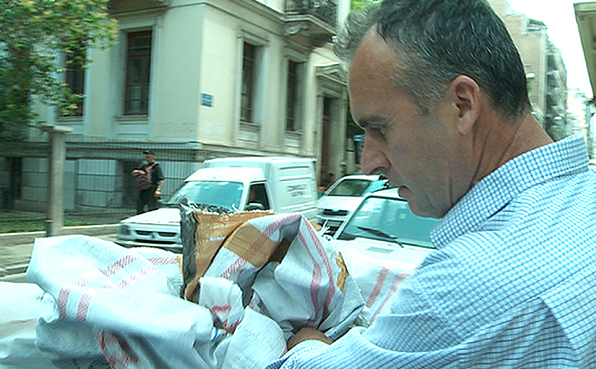 Earlier today we documented the “heartbreaking” plight of Greece’s retirees who have been reduced to lining up in front of Greek banks hoping for a chance to collect a portion of their pensions. Some went away empty handed (there were reports that only those whose last names began with “A” through “K” were paid on Wednesday) and those who did manage to leave with cash were only allowed to access a third of their usual payouts.

This comes as Greeks may (and we emphasize “may”, because nothing is certain and the Greek government has bent over backwards to claim that deposits are “safe”) face a Cyprus-like depositor bail-in in the weeks ahead.

But as bad as all of the above is, it gets still worse, because as The Telegraph reports, the beleaguered Greek populace has been reduced to collecting scrap metal and scavenging for food.

Piled high with rubbish congealing in the summer heat, municipal dustbin R21 on Athens’ Sofokleous Street does not look or smell like a treasure trove.

But for Greece’s growing army of dustbin scavengers, its deposits of rubbish from nearby stores and grocery shops make it a regular point of call.

“Sometimes I’ll find scrap metal that I can sell, although if I see something that looks reasonably safe to eat, I’ll take it,” said Nikos Polonos, 55, as he sifted through R21’s contents on Tuesday morning. “Other times you might find paper, cans, and bottles that you can get money for if you take them back to the shops for recycling.

One reason for R21’s popularity is because it is just down the road from a church soup kitchen, where the drug-addicted, the poor and homeless queue up for meals three times daily.

Mr Polonos, a quietly spoken man of 55, is typical of the new class of respectably destitute. He lost his job as a construction worker three years ago, when Greece’s building boom dried up, and in the current climate, cannot see himself finding paid work in the foreseeable future.

Yet he dresses as smartly as he can in second-hand trousers and shirt, and does not see himself as any kind of vagrant.

“I don’t want to ever look like him,” he said, gesturing to a tousle-haired drug addict slumped in a doorway near the soup kitchen. “I never believed I would end up like this, but as long as Greece is in this terrible situation, my construction skills are not in demand. A lot of my friends are doing what I do now, and some people I know are even worse off. They have turned to drugs and have no hope at all.”

Perhaps the most tragic thing about the above is that, as noted in the video, this is hardly a recent development in Greece.

High unemployment has plagued the country for years and has indeed become endemic, relegating many Greeks to a life of perpetual and severe economic hardship. One can only hope that whatever the outcome of this weekend’s referendum turns out to be, both Athens and Brussels will recognize the need to arrest what has become an outright humanitarian crisis.