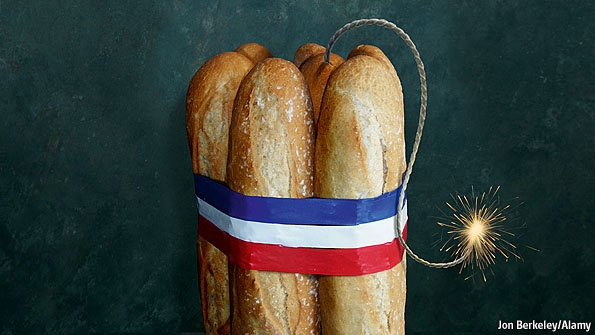 Earlier today Wikileaks released a new batch of NSA intercepts among which one in particular stands out: an intercepted communication which reveals that then French Finance Minister Pierre Moscovici believes the French economic situation was far worse, as of mid-2012, than perceived.

Specifically, Moscovici who served as French finance minister until 2014 and then became European commissioner for Economic and Financial Affairs, Taxation and Customs, used some very colorful language, i.e., the French economic situation was “worse than anyone [could] imagine and drastic measures [would] have to be taken in the next two years”.

Needless to say, no drastic measures were taken. In fact, no measures at all were taken because thanks to the ECB’s “whatever it takes” 2012 intervention and subsequent QE, pushed French yields to record low levels making the need for any reform moot (a la Greece, until the whole circus exploded).

He remarks about that the situation with the automotive industry was more critical than a pre-retirement unemployment supplement known as AER, which he also thought wouldn’t have had a severe impact on elections (while senator Bourquin thought would have driven voters to right-wing National Front).

Moscovici’s conclusion was that “the situation is dire” although the finance minister ignored warnings that without a “pre-retirement unemployment supplement known as the AER… the ruling Socialist Party will have a rough time in the industrial basin of the country, with voters turning to the rightwing National Front.”

Moscovici disagreed. Fast forward 3 years, and not only did French unemployment just hit an all time high confirming that the economic situation has indeed never been more dire…

… but the frontrunner for the next French president is none other than National Front’s Marine Le Pen, who will no doubt seize this memo as further proof of the terrible economic state of the country and leverage it even more to her benefit, and add even more fuel to the Frexit fire. As a reminder, Le Pen now prefers to be called Madame Frexit because as she warned last week, when she becomes president, unless the Eurozone yields to her demands, France will be the next country out of the monetary project effectively ending the Eurozone. For more read “Forget Grexit, “Madame Frexit” Says France Is Next: French Presidential Frontrunner Wants Out Of “Failed” Euro.”

Here is the intercept (link):

French Finance Minister Says Economy in Dire Straits, Predicts Two Atrocious Years Ahead (TS//SI//NF) (TS//SI//NF) The French economic situation is worse than anyone can imagine and drastic measures will have to be taken in the next 2 years, according to Finance, Economy, and Trade Minister Pierre Moscovici.

On 19 July, Moscovici, under pressure to reestablish a preretirement unemployment supplement known as the AER, warned that the situation is dire. Upon learning that there are no funds available for the AER, French Senator Martial Bourquin warned Moscovici that without the AER program the ruling Socialist Party will have a rough time in the industrial basin of the country, with voters turning to the rightwing National Front. Moscovici disagreed, asserting that the inability to reinstitute the AER will have no impact in electoral terms, besides, the situation with faltering automaker PSA Peugeot Citroen is more important than the AER.

(COMMENT: PSA has announced plans to close assembly plants  and lay off some 8,000 workers.)

Moscovici warned that the 2013 budget is not going to be a “good news budget,” with the government needing to find at least an additional 33 billion euros ($39.9 billion). Nor will 2014 be a good year. Bourquin persisted, warning that the Socialist Party will find itself in a situation similar to that of Socialist former Spanish President Zapatero, who was widely criticized for his handling of his country’s debt situation. Moscovici countered that it was not Zapatero whose behavior the French government would emulate, but rather Social Democrat former German Chancellor Gerhard Schroeder.

(COMMENT: Schroeder, chancellor from 1998 to 2005, was widely credited with helping to restore German competitiveness. He favored shifting from pure austerity measures to measures that encourage economic growth and advocated a common EU financial policy.)