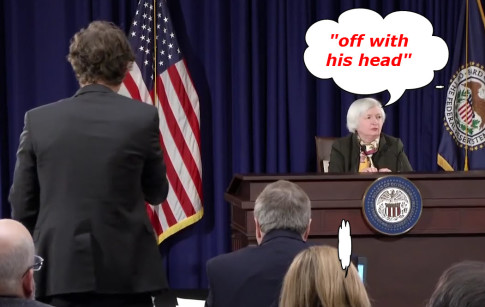 Earlier today we reported about a very sad development for the freedom of speech, or at least the illusion thereof, when one of, if not the best, critical Federal Reserve reporter in the mainstream media, WSJ’s Pedro da Costa founds he was no longer “invited” to the Fed’s quarterly press conference. His transgression: daring to ask Yellen some very uncomfortable questions during the March 2015 press conference. To wit:

PEDRO DA COSTA. Pedro da Costa with Dow Jones Newswires. I guess I have two follow-ups, one with regard to Craig’s question. So, before the IG’s investigation, according to Republican Congressman Hensarling’s letter to your office, he says that, “It is my understanding that although the Federal Reserve’s General Counsel was initially involved in this investigation, the inquiry was dropped at the request of several members of the FOMC.” Now, that predates the IG. I want to know if you could tell us who are these members of the FOMC who struck down this investigation? And doesn’t not revealing these facts kind of go directly against the sort of transparency and accountability that you’re trying to bring to the central

CHAIR YELLEN. That is an allegation that I don’t believe has any basis in fact. I’m not going to go into the details, but I don’t know where that piece of information could possibly have come from.

As it turns out, the allegation did have “basis in fact” because two months after this exchange, we learned that not only was there a parallel investigation into the Fed’s leaks in addition to the Hensarling subpoena, a criminal one by the Department of Justice at that, but that the Fed had indeed declined to comply with the subpoena as Pedro suggested.

The former Reuters reporter also had this testy exchange.

PEDRO DA COSTA. If I could follow up on his question. I think when you get asked about financial crimes and the public hears you talk about compliance, you get a sense that there’s not enough enforcement involved in these actions, and that it’s merely a case of kind of trying to achieve settlements after the fact. Is there a sense in the regulatory community that financial crimes need to be punished sort of more forcefully in order for them to be—for there to be an actual deterrent against unethical behavior?

CHAIR YELLEN. So, the—you’re talking about within banking organizations? So, the focus of regulators—the banking regulators—is safety and soundness, and what we want to see is changes made as rapidly as possible that will eliminate practices that are unsafe and unsound. We can’t—only the Justice Department can bring criminal action, and they have taken up cases where they think that that’s appropriate. In some situations, when we are able to identify individuals who were responsible for misdeeds, we can put in place prohibitions that bar them from participating in banking, and we have done so and will continue to do so.

At this point we will refrain from bringing up the constant narrative of Goldman’s total and utter control of the NY Fed: between our disclosures from 5 years ago, to the recent release of the “Secret Goldman Sachs Tapes” thanks to Carmen Segarra, this is well known to all, however we will observe the irony that just yesterday a US Court found that the Fed’s bailout of at least one financial entity (AIG) was illegal and a major overstep of not only the boundaries of the Fed, claiming that Section 13(3) did not permit the Fed to acquire a borrower’s equity as consideration for a bailout loan (i.e., a “nationalization” by the Fed), but that the actions “in acquiring control of AIG constituted a taking without just compensation and an illegal exaction, both in violation of the Fifth Amendment to the U.S. Constitution.”

Instead, we want to highlight something completely different: today’s absolute failure at investigative reporting, and the worst example of journalistic capture by the Federal Reserve – worse even than what we reported in “On The New York Fed’s Editorial Influence Over The WSJ” – that we have ever seen.

Unlike three months ago, it was not what was said, but rather what wasn’t, which also happens to be the key issue eating away modern US society, far worse than whether the Fed is blowing the biggest asset bubble of all time (it is), if it is woefully behind the curve on raising rates (it is), or whether the US “recovery” is so strong a 0.25% hike from 0% after 7 years will crash the economy (not even worth commenting).

The issue is the criminality, competence and corruption of that most important of organizations in modern society, the US Federal Reserve.

This is what Pedro implored his “journalist” peers to ask when he found that he would not be allowed inside the holiest of money-printing holies:

Just to make their lives easier, Pedro provided all the documentary evidence they may not already have, in addition to the Congressional subpoena and the news of the DOJ criminal investigation.

Pedro repeated his request shortly before the FOMC conference:

And just in case anyone from his “intrepid, journalistic” peers missed it, he did it again:

To help then, Pedro even provided Twitter vue cards:

#AskYellen: Why did you meet with private Medley analyst despite rules you helped draft discouraging such meetings? http://t.co/wouJg3n0A6

#AskYellen: Why did Fed fail to alert its Inspector General and the Justice Department of a possibly-criminal leak? http://t.co/3dfEC6FLpK

And with all that, one would imagine that someone, anyone, from the so-called “reporters” in Yellen’s presence would have if not the guts, then at least the curiosity to at least ask what Pedro had already asked three months ago: after all, it is in the public record, and it has been corroborated by the recently announced criminal investigation, right? Wrong.

Some tried to “justify” this behavior:

The absence of a leak question is a coordination failure. I suspect many of us would have asked if we knew no one else would.

But as Pedro promptly and accurately pointed out:

It was an hour-long press conference. https://t.co/zpUROpBad1

Yes, many would have done something if they knew no one else would. End result: nobody did anything.

And so, today we finally got a true glimpse of just what “access” financial journalism in the US has truly become: a petty clique in which everyone wants to be an “Andrew Ross Sorkin” access reporter, never daring to ask any important questions, always afraid to challenge either the subject or the status quo, and quite content with irrelevant fluff over actual matter.

For which we are grateful, because we now know why the Fed can and does keep getting away with its endless charade of repeating the same mistakes again and again. The reason is simple: the fourth estate no longer is a valid counterbalance to the stupidity of the self-anointed “infallible” central-planners of the western (and really with China now engaging in LTRO and Twist, eastern too) world whose only remaining craft is the last-ditch attempt to restore confidence in a world which, paradoxically, has seen ever greater central bank intervention with every passing year: a process which is so self-defeating we understand perfectly well why the career economists at the Fed are so blind to it.

Instead, said fourth estate is perfectly happy to produce worthless copy in some cubicle, happy to collect its pay, because it knows that just one complaint from the Fed would mean an immediate pink slip and a confrontation with the true state of the US economy, which contrary to Fed promises and erroneous mainstream media reporting, keep deteriorating further and further.

Thanks to the Fed.

Thank to Pedro’s “fellow Fed reporters”, none of whom had the balls to ask a simple question.

Then again in retrospect, we can understand why. In a world in which the Fed perceives itself as omnipotent, and where anyone even daring to question its motives, its methods or its track record, is a threat to be eradicated or at least barred from all future opportunities for further humiliation and disclosure that the emperor has indeed been naked from day one, at even such token events as a press conference where questioners are generously afforded 60 seconds in which to expose said emperor.

This is what Pedro found out the hard way today, a discovery which also allowed the rest of us to finally comprehend the farcial, hollow facade this country has passing off as its crack “financial journalists” asking “tough questions” all of whom ended up being nothing more than “access scribes”, terrified to open their mouths and lose their access, an outcome which incidentally just might force them to do some real reporting for once, instead of sending rhetorical letters to the middle class asking why it keeps being “stingy” instead of spending its hard-earned money, and making the beloved Fed’s life so difficult…