While the Greek government believes it may have won the battle, if not the war with Europe, the reality is that every additional day in which Athens does not have a funding backstop, be it the ECB (or the BRIC bank), is a day which brings the local banking system to total collapse.

As a reminder, Greek banks already depends on the ECB for some €80.7 billion in Emergency Liquidity Assistance which was about 60% of total deposits in the Greek financial system as of April 30. In other words, they are woefully insolvent and only the day to day generosity of the ECB prevents a roughly 40% forced “bail in” deposit haircut a la Cyprus. 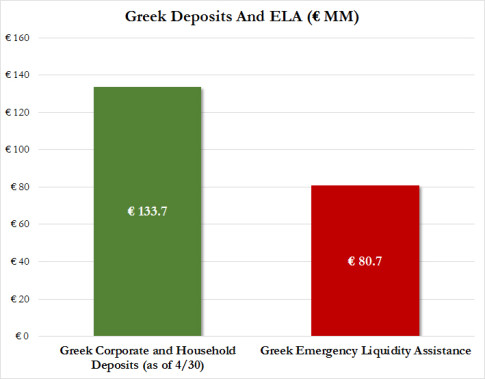 The problem is that a Greek deposit number as of a month and a half ago is hopefully inaccurate. It is also the biggest problem for Greece, which has been desperate to prevent an all out panic among those who still have money in the banking system.

Things got dangerously close to the edge last Friday (as noted before) when things for Greece suddenly looked very bleak ahead of this week’s IMF payment and politicians were forced to turn on the Hope Theory to the max, promising a deal with Europe had never been closer.

It wasn’t, and instead Greece admitted its sovereign coffers are totally empty this week when it “bundled” its modest €345 million payment to the IMF along with others, for a lump €1.5 billion payment, which may well never happen.

And the bigger problem for Greece is that after testing yesterday the faith and resolve of its depositors (not to mention the Troika, aka the Creditors) and found lacking, said depositors no longer believe in the full faith (ignore credit) of the Greek banking system.It may have been the Greek government’s final test.

Because accoring to banking sources cited by Intelligent News, things today went from bad to horrible for Greek banks, when Greeks “responded with massive outflows to the Greece’s government decision to bundle the four tranches to IMF into one by the end of the June.”

According to banking sources, the net outflows sharply increased on Friday and the available liquidity of the domestic banking system reduced at very low and dangerous levels.

The same sources estimate the outflows on Friday around 700 million Euros from 272 million Euros on Thursday. The available emergency liquidity assistance (ELA) for the Greek banks is estimated around 800 million Euros. In addition, the outstanding amount of the total deposits of the private sector (households and corporations) has declined under 130 billion Euros or lower than the levels at early 2004.

The total net outflows in the last 7 business days are estimated 3.4 billion Euros threatening the stability of the Greek banks.

This means 2.5% of all Greek deposits were pulled in just the past 5 days! Indicatively, this is the same as if US depositors had yanked $280 billion from US banks (where total deposits amount to about $10.7 trillion)

As further reported, the Bank of Greece is set to examine on Monday if Greece will urgently ask additional ELA. However, since one of the main conditions by the ECB to keep providing ELA to Greece is for its banks to be “solvent” (a condition which is only possible thanks to the ECB), one wonders at what point the Troika, whose clear intention it has been from day one to cause the Greek bank run in the process leading to the fall of the Tsipras government, will say “no more.”

For those interested, according to IN, the deposit (out)flows in the last 7 business days are as follows: 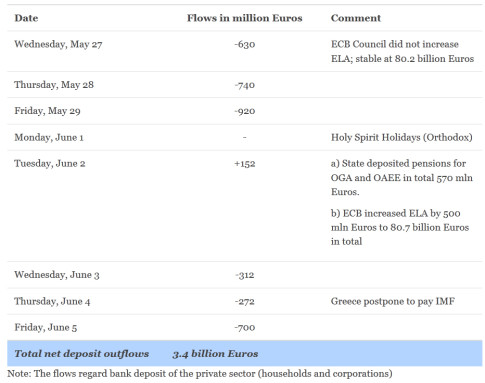 Finally, for those who missed it, here is the first hand account of the Greek bank run from precisely a week ago as retold by ZH contributor Tom Winnifrith:

Jim Mellon says that the Greeks should build a statue in my honour as on Friday I opened a bank account in Greece and made a deposit. Okay it was only 10 Euro, I need to put in another 3,990 Euro to get my residency papers so I can buy a car, a bike and a gun, but it was a start. But the scenes at the National Bank in Kalamata were of chaos, you could smell the panic and they were being replicated at banks across Greece.

For tomorrow is a Bank Holiday here and if you are going to default on your debts/ switch from Euros to New Drachmas a bank holiday weekend is the best time to do it. And with debt repayments that cannot be met due on June 5 (next Friday) Greece is clearly in the merde. If it defaults all its banks go bust.

But I had to open an account and make a deposit. Outside the bank in the main street of Kalamata there are two ATMs. The lines at both were ten deep when I arrived and when I left an hour later. Inside I was directed to the two desks marked “Deposit”. You go there to put in money, to open an account or if you are so senile that you cannot do basic admin of your account without assistance. As such it was me depositing cash and four octogenerians who had not got a clue about anything. Actually I lie. These folks may have been gaga but they were not so gaga that they were actually going to deposit cash, I was the sole depositer.

Friday was also the day when pensions are paid into bank accounts. On the Wednesday and Thursday it was reported that Greeks withdrew 800 million Euro from checking accounts. Friday’s number will dwarf that. Whe you go to a Greek bank you pull off a ticket and wait for your number to be called. The hall in my bank contains about 60 seats all of which were filled. There were folks standing behind the seats and in fact throughout the hall, all wanting to get their cash out before the bank closed at 2 PM.

At the side of the room, shielded by a glass screen sat a man behind a big desk. He tapped away at his screen and made phone calls. Ocassionally folks wandered over, shook papers in his face and harangued him having got no joy elsewhere. So I guess he was the bank manager. I rather expected him to end one phone call and stand up to say “That was Athens – all the money has gone, its game over folks.” But he didn’t. He may well do so at some stage soon.

Eventually I got the the front of my five person queue of the senile and opened my account. Passport, tax number, phone number all in order. I handed over a 10 Euro note and the polite – if somewhat stressed – young man gave me about ten pieces of paper to sign and stamped my passbook. I have done my bit for Greece and have given it 10 Euro which I will lose one way or another in due course. So Jim – time to lobby for that statue.

The Government did not put up a default notice on Friday as I half expected. The can kicking goes on. The ATMs will be emptied this weekend and on Tuesday and in the run up to a potential default day next Friday the banks will be packed again with folks taking out whatever money they can.

It is not just the bank coffers that are being emptied. To get to The Greek Hovel where I sit now from my local village of Kambos is a two mile drive. On my side of the valley there is some concrete track but it is mainly a mud road. On the other side of the valley there is a deserted monastery so to honour the Church – even if there are no actual monks there – a concrete road was built in the good times. By last summer it was more pothole than road.

By law, since I have water and electricity, I can demand that the road be mended and so last summer I went to the Kambos town hall (4 full time staff serving a population of 536) and did just that. They said “the steam roller is broken and we have no money but will try to do it in the Autumn.” They did not.

But last week a gang of men appeared and the road is now pothole free, indeed in some places we have a whole new concrete surface. And as I head towards Kalamta there are extensive road mending programmes. At Kitries, the village has found money to renovate its beach front. It is a hive of activity across the Mani.

Quite simply each little municipality is spending every cent it has as fast as it can. The Greek State asked all the town halls to hand over spare cash a few weeks ago to help with the debt repayment. The town halls know that next time it will not be a request but an order. But by then all the money they had hoarded will have been spent. That is Greekeconomics for you.

Everyone knows that something has to give and that it will probanly happen this summer. The signs are everywhere.