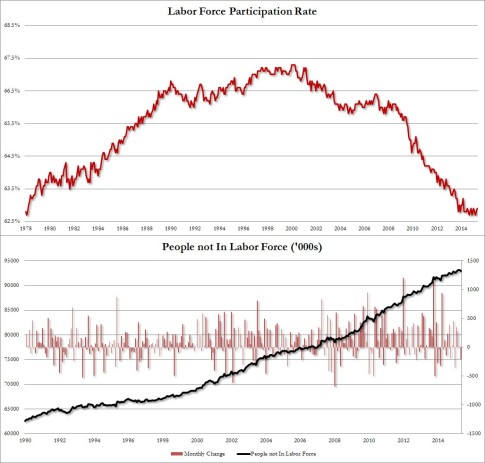 The reason why despite the better than expected increase in jobs the US unemployment rate rose from 5.4% to 5.5% even as the number of Unemployed workers rose by 125K to 8,674MM was due to the 397K influx into the civilian labor force which rose to 157.459MM, a new record high in the series, which on the surface would suggest declining slack as more people who have been traditionally left out of the employment calculation go back into the labor pool.

Which aslo meant that since the total US civilian non-institutional population rose by half this number, the number of Americans not in the labor force declined by 208K to just about 93 million.

And, as a result, the biggest malady affecting the US economy today, is still in place: as the chart below shows, the labor force participation rate rose just barely from 62.8% to 62.9%, a range it has been for the past year. Indicatively, the last time the US labor force was here, was in mid-1978.