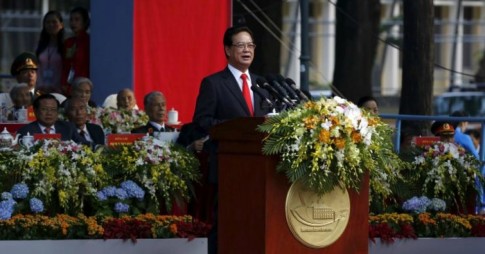 “Our homeland had to undergo extremely serious challenges,” he added.

At least three million Vietnamese people were killed in the war, which also took the lives of 58,000 U.S. military service members.

The chemical weapon known as Agent Orange, deployed heavily by the U.S. military forces, continues to cause birth defects and take life in Vietnam. According to the Vietnam Association of Victims of Agent Orange/Dioxin, approximately three million Vietnamese people have faced deadly sickness, disability, and disease as a result.

The U.S. has never compensated Vietnamese people for the destruction caused by Agent Orange or the war at large.

1 thought on “40 Years After Vietnam War, Prime Minister Decries ‘Barbarous Crimes’ of US”