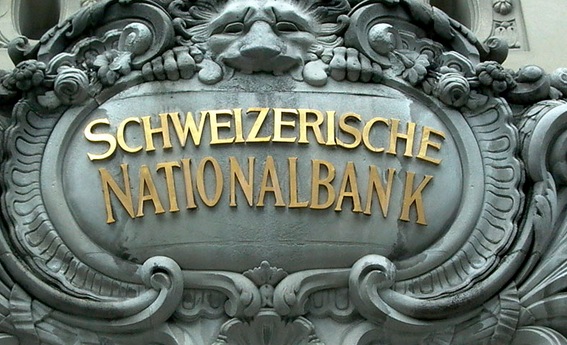 This is how the SNB described its loss:

The Swiss National Bank (SNB) reports a loss of CHF 30.0 billion for the first quarter of 2015.

The loss on foreign currency positions amounted to CHF 29.3 billion. A valuation loss of CHF 1.0 billion was recorded on the gold holdings.

The SNB’s financial result depends largely on developments in the gold, foreign exchange and capital markets. Strong fluctuations are therefore to be expected, and only provisional conclusions are possible as regards the annual result.

The negative result on foreign currency positions amounted to CHF 29.3 billion in total.

On 15 January 2015, the SNB decided to discontinue the minimum exchange rate of CHF 1.20 per euro with immediate effect. This led to an appreciation of the Swiss franc and, as a result, to exchange rate-related losses on all investment currencies. For the first quarter of 2015, these amounted to a total of CHF 41.1 billion.

Interest income provided a positive contribution, at CHF 1.6 billion, as did dividend income, at CHF 0.3 billion. The generally lower interest rate level resulted in price gains of CHF 3.7 billion on interest-bearing paper and instruments. Equity securities and instruments benefited from the favourable stock market environment and contributed CHF 6.2 billion to the net result.

The subsequent commentary was amusing. Reuters reports that “had the SNB maintained the cap on the franc in the face of a quantitative easing programme by the European Central Bank, the expansion of the SNB’s balance sheet would have been even greater and eventual losses more devastating, said Peter Rosenstreich, head of market strategy at Swissquote Bank.”

Which, of course, sums up what anyone who is buying stocks or bonds can expect because every bubble, even those of central bank balance sheets, or rather especially those, eventually bursts.

…the loss could have political repercussions for the central bank, and could rule out an annual payment to its shareholders, including the federal government and cantons.

“This massive loss will have a lasting sting on the psyche at the SNB and politically within the cantons, which might hamper policy strategy moving forward,” Rosenstreich said.

Yes, traumatic and all that.

But what caught our attention was not the SNB Income Statement but its Balance Sheet. Here, we find that while the total assets of the SNB have risen to CHF581 billion as of March 31, the bulk of this was due to “foreign currency investments”, which amounted to CHF532 billion. 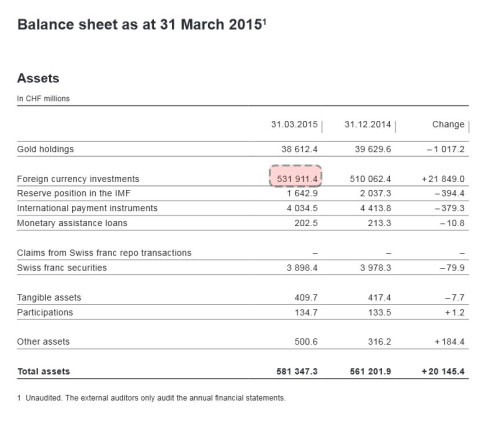 That’s impressive, but that’s not the punchline.

What is, is the following table, according to which 18%, or CHF95 ($102 billion) of the assets held on the SNB’s balance sheet are, drumroll, foreign stocks! 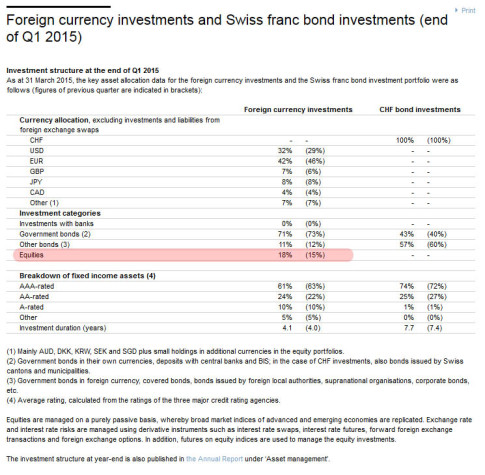 In other words, the SNB holds 15% of Switzerland’s GDP in equities!

We’ll give the SNB credit: while every other central bank is loaded to its gills in stocks, none dare admit it.

That said, with an equity AUM greater than 99.9% of all global hedge funds, isn’t it time for the SNB to at least file a 13-F?

And not just the SNB – with the NY Fed having participated directly and indirectly (via Citadel) in the market for the past decade if not longer, is it too much to ask of the world’s central banks to reveal the amount and identity of stock (and E-mini) holdings? After all, both the Fed, the SNB and all their peers are desperate to “reflate” the world in the only way they can – though stock market levitation. So if anything, admitting to the world not only that they buy stocks outright, but show which stocks they buy, resulting in massive future lagged frontrunning of such central bank 13-F purchases.