“As 2,200 former Wal-Mart employees struggle to understand how “plumbing issues” could have possibly cost them their jobs literally overnight, and as the Labor Relations Board considers a complaint suggesting the retailer is using “clogs and leaks” as a pretense for retaliating against employees campaigning for workers’ rights, a California city is set to lose 10% of its total tax revenue. Meanwhile, the plumbing mystery deepens.“ 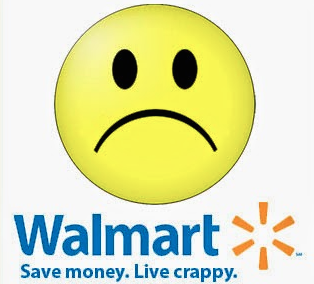 Earlier this month, we brought you the short history of worker protests at the Pico Rivera, CA Wal-Mart location. The store has been at the forefront of pickets, walkouts, and sit-ins for some time, with workers staging demonstrations every year since 2012, the latest of which came in November of last year and resulted in the arrest of two dozen workers. The employees — whose grievances generally revolve around wages, working conditions, and retaliation — have been supported by The United Food and Commercial Workers International Union or, UFCW, which last year prevailed in a Canadian Supreme Court case against the retailer stemming from a decade-old incident in Quebec when Wal-Mart closed a location after workers voted for UFCW representation.

Given the store’s history, one can hardly be blamed for wondering if Wal-Mart’s recent decision to close the location for “plumbing issues” was in fact an excuse to shutter a “problem” store. The plight of the Pico Rivera location is of course part of a larger story wherein Wal-Mart — in what we have suggested is an attempt to cut costs — has closed multiple stores nationwide (laying off some 2,200 employees in the process) to fix what the company says are “clogs and leaks.” The absence of plumbing permits, the company’s express desire to rein in costs on the back of an across-the-board wage hike, and the history of the Pico Rivera location led us to suggest that factors unrelated to pipes and drains may be at play.

Sure enough, just days after our Pico Rivera story ran, the UFCW filed a complaint with the National Labor Relations board alleging that the California store was closed to punish employees for worker activism.

In the latest from Pico Rivera, the city now says the company’s decision to close the location could have a decisively deleterious effect on tax revenue, 10% of which came from the local Wal-Mart. Here’s more via LA Times:

“It’s a severe blow to our community, certainly, with the local economy, the homes and families, in terms of those people that were counting on those paychecks,” mayor Gregory Salcido said.

With 530 workers, the Wal-Mart store is the city’s second-biggest employer, topped only by the El Rancho Unified School District. Pico Rivera’s nearly 64,000 residents have a median household income of almost $57,000, about average for the county.

Salcido estimated that Pico Rivera receives about $1.4 million a year in tax revenue from the retailer, potentially 10% of the city’s sales tax revenue. City officials, he said, are trying to figure out how to deal with the lost revenue if the store remains closed for at least six months, as Wal-Mart Stores Inc. has announced…

The city then helped develop a portion of the site into the Pico Rivera Towne Center, a 630,000-square-foot open-air shopping center.

When Wal-Mart arrived, the low prices were an immediate hit in the largely Latino town. It was open 24 hours; the aisles were often jammed.

The store was renovated in 2007 to become a Wal-Mart Supercenter that sold groceries and underwent further remodeling in 2014 (ZH: hold this thought)

Jenny Mills, a nine-year Pico Rivera Wal-Mart employee, lives in her car with her husband and their cat in the parking lot of her former store. The couple lost their apartment in Monterey Park about a year ago when the rent was raised and they couldn’t make payments.

She’s now part of the National Labor Relations Board filing and said she hopes to get her job back.

The Pico Rivera Towne Center has become an “economic engine” for the city in terms of retail, Salcido said. Other tenants in the center include Lowe’s, Marshalls, PetSmart and Panera Bread.

But the loss of the Wal-Mart store, even temporarily, Salcido said, “is significant, no doubt about it.”

Meanwhile, the LA Times also notes that the Pico Rivera location underwent a half-million dollar refurbishment last year that included some of the very same plumbing issues (see embedded document below) cited in the closure of the store this year, which begs two rather obvious questions: 1) why weren’t the problems fixed during the refurbishment and 2) why was WalMart able to complete last year’s plumbing work without closing the doors?

For reference, here is the complaint sent to the Labor Relations Board:

Enclosed is a Charge we are filing on behalf of OUR Walmart.

This charge arises out of the well-publicized decision by Walmart to suddenly close five stores on the pretext of a “plumbing”problem in each of the stores. Walmart’s action was intended to target the Pico Rivera store, which has been the focal point of activity by Associates for better working conditions.

This case warrants immediate relief under Section1Q(j). Approximately 2200 Walmart Associates around the country have been thrown out of their jobs. Although Walmart has offered WARN Act payments, the employees are being asked to sign severance agreements in order to receive additional severance pay.

Thus, Walmart is attempting to weed out many of the activists in the Pico Rivera store as well as the other stores who are subject to this sudden and wholly unexplained “closure” because of unexplained “plumbing problems.”

We are prepared to present a number of workers immediately to the Region who worked in the Pico Rivera store. They will describe the activity which has gone on in that store and elsewhere since at least 2012.

The Region is already familiar with much of this because of Case 21-CA-10541, as well as other consolidated cases which are pending in various Regions or before various Administrative Law Judges.

Please assign this immediately to a Board Agent who can begin taking statements in the next day or so.

We will be presenting additional evidence in support of this.

We expect that Walmart will come up with some pretextual argument that there was a “plumbing problem.” No one in the City Administration of Pico Rivera  was aware of any plumbing problem. No permits have been pulled or sought. This, in fact, is true of all five of the stores as far as we can tell.

And here is the permit for last year’s refurbishments: