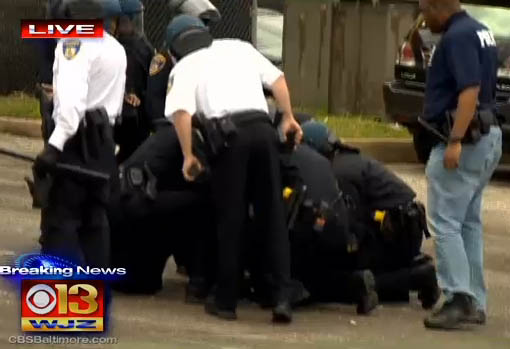 The situation is escalating quickly in Baltimore after police said they received “credible” threats from street gangs who have promised to ban together to “take out” cops in the wake of protests surrounding the funeral of Freddie Gray who died after suffering a spinal injury while being taken into custody by authorities.

Now, the SWAT team has been called out to confront protesters

Police van on fire as well as car on W North #Baltimore#BaltimoreRiotspic.twitter.com/SYuurFzUbG

REMINDER:
There are peaceful protests all over #Baltimore right now. #FreddieGraypic.twitter.com/BzkMaoOgQU

Now they are busting into a bank! #Baltimore#PrayersForBaltimorepic.twitter.com/jF3Nz57cZE

And finally, in an attempt to bring some levity to this dire situation…