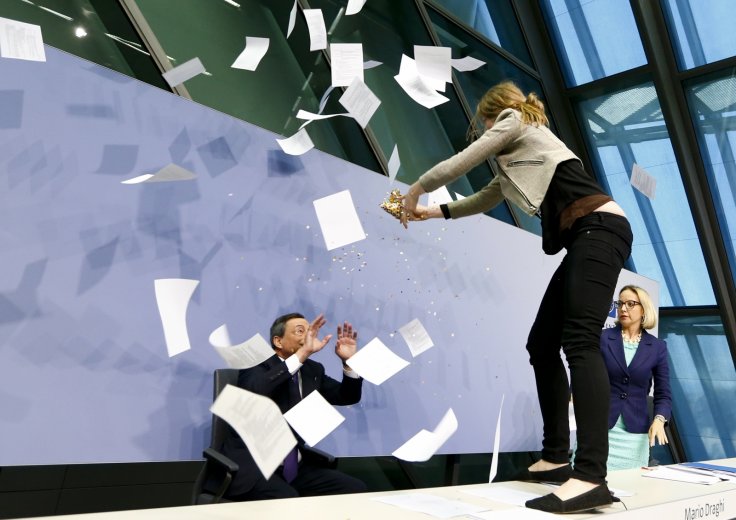 The moment I jumped on the table and showered Draghi with confetti.

You may well have seen the coverage of my intervention in the ECB press conference yesterday, during which I jumped on the table and showered Mario Draghi with confetti. Many people have contacted me on social media since then, asking me why I did it, how I got into the ECB’s inner sanctum so easily, and what stunts I plan in future.

Here, I’ll attempt to answer those questions as comprehensively as I can.

First, the inspiration. Four weeks ago I saw the anti-ECB protest by Blockupy in Frankfurt, my home city. The demonstration was greeted with a massive, draconian police response in the form of tear gas, water cannons and riot shields.

I was shocked. I thought: “the ECB doesn’t have any political mandate, it’s never been elected. Why are the police defending them with such brutal force?” I wanted to to try and take the criticism against the ECB’s policies to the very heart of the organisation, inside their buildings.

Then there’s the issue of Greece. I admit that I’m not a financial expert, but I know that there is a set time period in which debts can be repaid. For Greece, this has been shortened. This demonstrates, and perpetuates, a blatant bias against the countries of southern Europe; the northern states feel their southern neighbours are lazy and work-shy, and spend their days having a good time on the beach. None of this true.

The crisis has ravaged everyone, including us in Germany. The gap between rich and poor is as big as it’s ever been, and we can clearly see the rise of Fascism, which is intrinsically linked to the north-south narrative propagated by the ECB. This institution contains people with huge expertise, very intelligent people, but they are not working in favour of the European population. They are working against the wellbeing of Europe as a whole.

Ok, now onto the protest itself. Getting in was simple; I told a little lie. I told them I was a reporter, working for Vice. I’ve never been in touch with Vice in my life, but I thought I’d fit their mould; I’m young (21 years old) and they always seem to have young reporters. Were the ECB surprised that someone from Vice wanted to cover their press conference? I don’t know. All I know is that it worked, and, when I arrived yesterday, I got in without any problems. The only thing I shared was my identity card.

They put my bag through the X-ray and I wasn’t carrying any weapons, so I was straight though. I went straight for the front row, waiting for Draghi to arrive. I initially thought I was going to wait a while, until he got on to Greece, but after half a minute I was so bored that I knew I had to do something.

It was a complete success from my perspective. I could jump on the table without hurting myself, and without hurting him, because, of course, it was supposed to be a non-violent protest.I chose confetti because, in previous protest as part of the FEMEN movement, I have used my breasts; this time I wanted to do something equally colourful, equally attention-grabbing, and equally harmless. The shock on Draghi’s face was amazing.

I was taken downstairs and then escorted to the police station, but I didn’t stay long. Some might think that I feared the worst, and would have been worrying about a more severe punishment, but that wasn’t the case at all; the confetti wasn’t dangerous, what I did was nothing really. Being honest, I doubt I will face further action. The ECB would ridicule itself by putting charges in front of me, they will just want to forget this ever happened.

‘Some people think I was seeking attention, but that’s not the case.’

When I returned from the police station, I saw all the positive response on the internet, which was amazing. I was overwhelmed by the response; I didn’t expect so many positive messages. I only had a handful of negative responses, and these were mainly directed at the underwear I was wearing (my pants were briefly visible when I jumped on the table). I reacted to that with the hashtags #feminism and #morefeminism.

Apart from this small band of trolls, the majority of people have focused on the important thing, which was the leaflet I put on the table, a message against austerity. That was what I wanted all along.

Some people have said that by launching this protest, and by putting my e-mail address on Twitter, I was seeking attention, but that’s not the case. I wanted to get a message across, and, judging by the coverage, that has been delivered. 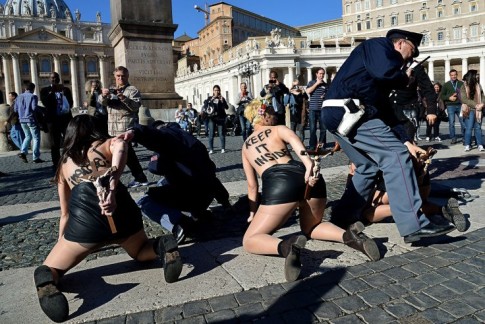 I am no longer affiliated to FEMEN, but they still inspire me. (AFP)

So, what’s next? Well, I can say for certain that I am going to launch more protests. That is my life; as you may have read, I’m a freelance activist. Well, that’s not all I do. I’m a student, and I subsidise my protests by working in a café in Frankfurt. I’ve been involved in so many protests that I’ve lost count, but I can name the most successful ones; the demo against Putin in Hannover, the Free Amina action in Tunisia, the protest against the nomination of Qatar for the World Cup.

No-one pays me for my protests. I demonstrate about whatever I want, without being guided by a particular agenda or controlling body. Protesting is actually very cheap if you use public transport, and, if they decide to take me to trial for the Draghi stunt, I’ll just crowdfund it.

That’s all for the future though. For now, I’m already drawing up a list of places, and people, to target. I can’t share that list though, otherwise it wouldn’t be a surprise!

As my profile grows, it’s going to be harder and harder to sneak into places. But I was able to sneak into the ECB, which has very heavy security, so hopefully you will see me do it again. And, just as importantly, I hope my action inspires others.