“I think everybody in the world should read this.

It’s hard to envision this level of destruction.” 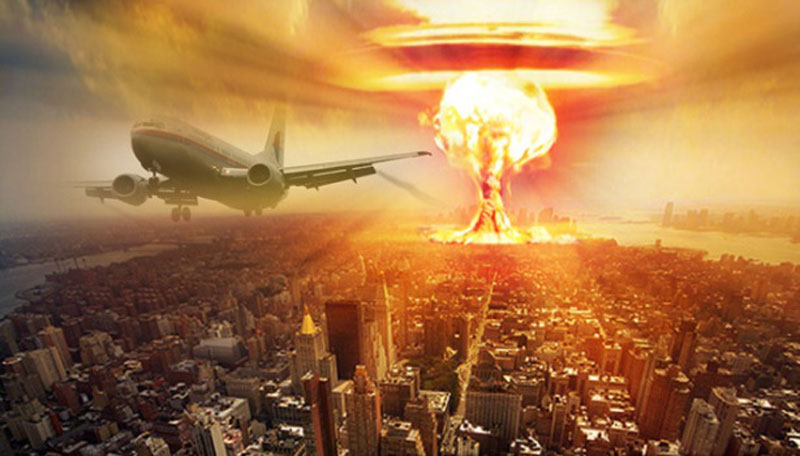 By Steven Starr, Lynn Eden, and Theodore A. Postol

What would happen if just one 800-kiloton nuclear warhead was detonated above midtown Manhattan?

Russian intercontinental ballistic missiles are believed to carry a total of approximately 1,000 strategic nuclear warheads that can hit the US less than 30 minutes after being launched.

Of this total, about 700 warheads are rated at 800 kilotons; that is, each has the explosive power of 800,000 tons of TNT. What follows is a description of the consequences of the detonation of a single such warhead over midtown Manhattan, in the heart of New York City. 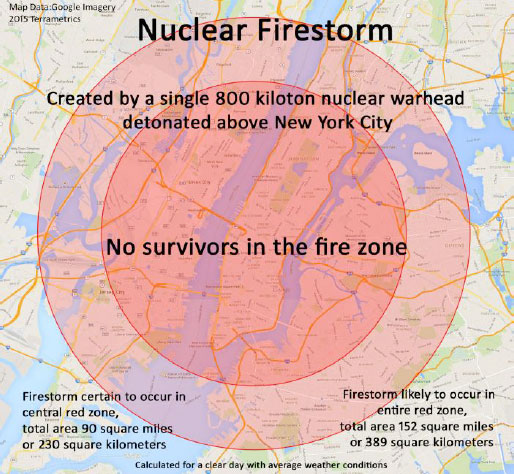 The initial fireball. The warhead would probably be detonated slightly more than a mile above the city, to maximize the damage created by its blast wave.

A ball of superheated air would form, initiallly expanding outward at millions of miles per hour. It would act like a fast-moving piston on the surrounding air, compressing it at the edge of the fireball and creating a shockwave of vast size and power.

After one second, the fireball would be roughly a mile in diameter. It would have cooled from its initial temperature of many millions of degrees to about 16,000 degrees Fahrenheit, roughly 4,000 degrees hotter than the surface of the sun.

On a clear day with average weather conditions, the enormous heat and light from the fireball would almost instantly ignite fires over a total area of about 100 square miles.

Hurricane of fire. Within seconds after the detonation, fires set within a few miles of the fireball would burn violently. These fires would force gigantic masses of heated air to rise, drawing cooler air from surrounding areas toward the center of the fire zone from all directions.

As the massive winds drove flames into areas where fires had not yet fully developed,the fires set by the detonation would begin to merge. Within tens of minutes of the detonation, fires from near and far would joinhave formed a single, gigantic fire. The energy released by this mass fire would be 15 to 50 times greater than the energy produced by the nuclear detonation. 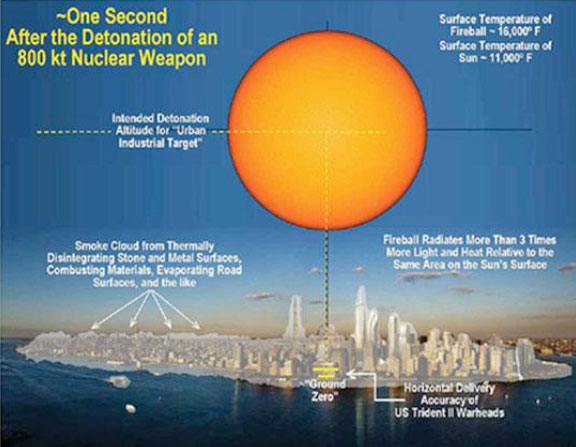 The mass fire, or firestorm, would quickly increase in intensity, heating enormous volumes of air that would rise at speeds approaching 300 miles per hour.

This chimney effect would pull cool air from outside the fire zone towards the center of the fire at speeds of hundreds of miles per hour.

These superheated ground winds of more than hurricane force would further intensify the fire.

At the edge of the fire zone, the winds would be powerful enough to uproot trees three feet in diameter and suck people from outside the fire into it.

The inrushing winds would drive the flames from burning buildings horizontally along the ground, filling city streets with flames and firebrands, breaking in doors and windows, and causing the fire to jump, sometimes hundreds of feet, swallowing anything not already violently combusting.

These above-hurricane-force ground winds would have average air temperatures well above the boiling point of water. The targeted area would be transformed into a huge hurricane of fire, producing a lethal environment throughout the entire fire zone. 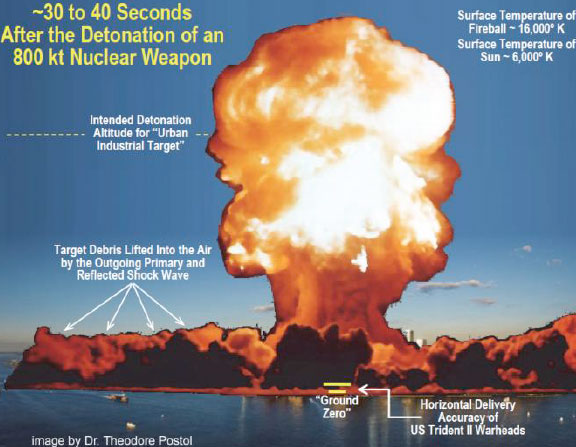 Ground zero: Midtown Manhattan. The fireball would vaporize the structures directly below it and produce an immense blast wave and high-speed winds, crushing even heavily built concrete structures within a couple miles of ground zero.

The blast would tear apart high-rise buildings and expose their contents to the solar temperatures; it would spread fires by exposing ignitable surfaces, releasing flammable materials, and dispersing burning materials.

At the Empire State Building, Grand Central Station, the Chrysler Building, and St. Patrick’s Cathedral, about one half to three quarters of a mile from ground zero, light from the fireball would melt asphalt in the streets, burn paint off walls, and melt metal surfaces within a half second of the detonation.

Roughly one second later, the blast wave and 750-mile-per-hour winds would arrive, flattening buildings and tossing burning cars into the air like leaves in a windstorm. Throughout Midtown, the interiors of vehicles and buildings in line of sight of the fireball would explode into flames.

Slightly more than a mile from ground zero are the neighborhoods of Chelsea, Midtown East, and Lenox Hill, as well as the United Nations; at this distance, for a split second the fireball would shine 10,000 times brighter than a desert sun at noon. All combustible materials illuminated by the fireball would spew fire and black smoke.

Grass, vegetation, and leaves on trees would explode into flames; the surface of the ground would explode into superheated dust. Any flammable material inside buildings (paper, curtains, upholstery) that was directly exposed to the fireball would burst into flame. The surfaces of the bronze statues in front of the UN would melt; marble surfaces exposed to the fireball would crack, pop, and possibly evaporate. 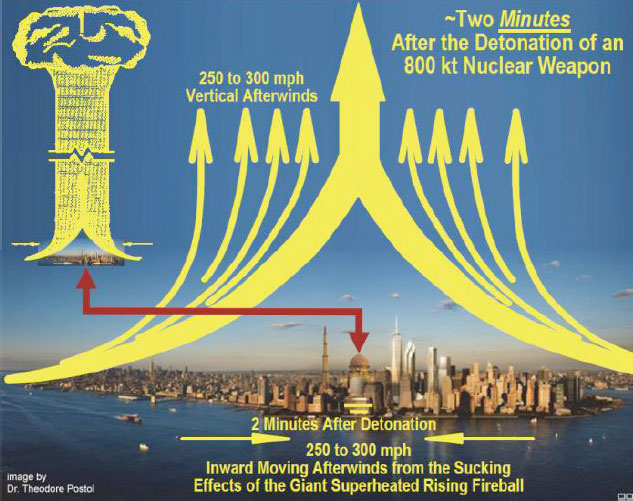 At this distance from the fireball, it would take about four seconds for the blast wave to arrive. As it passed over, the blast wave would engulf all structures and crush them; it would generate ferocious winds of 400 to 500 miles per hour that would persist for a few seconds.

The high winds would tear structural elements from buildings and cause them to disintegrate explosively into smaller pieces.

Some of these pieces would become destructive projectiles, causing further damage. The superheated, dust-laden winds would be strong enough to overturn trucks and buses.

Two miles from ground zero, the Metropolitan Museum of Art, with all its magnificent historical treasures, would be obliterated. Two and half miles from ground zero, in Lower Manhattan, the East Village, and Stuyvesant Town, the fireball would appear 2,700 times brighter than a desert sun at noon. There, thermal radiation would melt and warp
aluminum surfaces, ignite the tires of autos, and turn exposed skin to charcoal, before the blast wave arrived and ripped apart the buildings.

Three to nine miles from ground zero. Midtown is bordered by the relatively wide Hudson and East rivers, and fires would start simultaneously in large areas on both sides of these waterways (that is, in Queens and Brooklyn as well as Jersey City and West New York).

Although the direction of the fiery winds in regions near the river would be modified by the water, the overall wind pattern from these huge neighboring fire zones would be similar to that of a single mass fire, with its center at Midtown, Manhattan.

Three miles from ground zero, in Union City, New Jersey, and Astoria, Queens, the fireball would be as bright as 1,900 suns and deliver more than five times the thermal energy deposited at the perimeter of the mass fire at Hiroshima. In Greenpoint, Brooklyn, and in the Civic Center of Lower Manhattan, clothes worn by people in the direct line of sight of the fireball would burst into flames or melt, and uncovered skin would be charred, causing third-degree and fourth-degree burns.

It would take 12 to 14 seconds for the blast wave to travel three miles after the fireball’s initial flash of light. At this distance, the blast wave would last for about three seconds and be accompanied by winds of 200 to 300 miles per hour. Residential structures would be destroyed; high-rises would be at least heavily damaged.

Fires would rage everywhere within five miles of ground zero. At a distance of 5.35 miles from the detonation, the light flash from the fireball would deliver twice the thermal energy experienced at the edge of the mass fire at Hiroshima. In Jersey City and Cliffside Park, and in Woodside in Queens, on Governors Island and in Harlem, the light and heat to surfaces would approximate that created by 600 desert suns at noon.

Wind speed at this distance would be 70 to 100 miles per hour. Buildings of heavy construction would suffer little structural damage, but all exterior windows would be shattered, and non-supporting interior walls and doors would be severely damaged or blown down. Black smoke would effuse from wood houses as paint burned off surfaces and furnishings ignited.

Six to seven miles from ground zero, from Moonachie, New Jersey, to Crown Heights, Brooklyn, from Yankee Stadium to Corona, Queens and Crown Heights, Brooklyn, the fireball would appear 300 times brighter than the desert sun at noon. Anyone in the direct light of the fireball would suffer third degree burns to their exposed skin. The firestorm could engulf neighborhoods as far as seven miles away from ground zero, since these outlying areas would receive the same amount of heat as did the areas at the edge of the mass fire at Hiroshima.

Nine miles from ground zero, in Hackensack, Bayonne, and Englewood, New Jersey, as well as in Richmond Hill, Queens, and Flatlands, Brooklyn, the fireball would be about 100 times brighter than the sun, bright enough to cause first- and second-degree burns to those in line of sight. About 36 seconds after the fireball, the shockwave would arrive and knock out all the windows, along with many interior building walls and some doors.

No survivors. Within tens of minutes, everything within approximately five to seven miles of Midtown Manhattan would be engulfed by a gigantic firestorm. The fire zone would cover a total area of 90 to 152 square miles (230 to 389 square kilometers). The firestorm would rage for three to six hours. Air temperatures in the fire zone would likely average 400 to 500 degrees Fahrenheit (200 to 260 Celsius).

After the fire burned out, the street pavement would be so hot that even tracked vehicles could not pass over it for days. Buried, unburned material from collapsed buildings throughout the fire zone could burst into flames when exposed to air—months after the firestorm had ended.

Those who tried to escape through the streets would have been incinerated by the hurricane-force winds filled with firebrands and flames. Even those able to find shelter in the lower-level sub-basements of massive buildings would likely suffocate from fire- generated gases or be cooked alive as their shelters heated to oven-like conditions.

The fire would extinguish all life and destroy almost everything else.Tens of miles downwind of the area of immediate destruction, radioactive fallout would begin to arrive within a few hours of the detonation.  But that is another story.

2 thoughts on “Top Scientists Warn Nuclear Bombs Deadlier Than Ever”