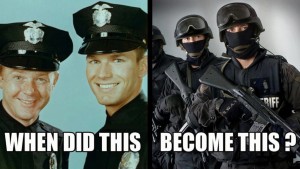 Murders reached a historic low in NYC for 2014; overall crime was down across the board by nearly 5%; hell, even the holiday slowdown didn’t really lead to any additional crime. So clearly, now is the time when NYC really needs to implement a new anti-terrorism program which would empower a team of NYPD officers to roam around the city carrying machine guns. What could go wrong?This new squad will be used to investigate and combat terrorist plots, lone wolf terrorists, and… protests. “It is designed for dealing with events like our recent protests, or incidents like Mumbai or what just happened in Paris,” Bratton said, according to CBS.

– From the Gothamist article: New NYPD Anti-Terror Unit Will Get Machine Guns To Police Protesters

The morphing of “terrorism” and “domestic dissent” into an all encompassing and convenient category known as “domestic terrorists” or “domestic extremists” has been a long time coming. It has always been my contention, and continues to be, that the oligarchs who have funneled all of the wealth to themselves since the 2008 banker bailouts know exactly what they are doing. They also know that it will eventually result in severe domestic unrest during the next cyclical downturn. As such, the agenda has been to utilize the entirety of the intelligence-industrial-military complex created by the “war on terror” against the domestic population once it recognizes how badly it has been looted.

All the way back in 2010, in the post, The Dangers of a Failed Presidency, I wrote:

There is clearly a power elite that consists of a union between big corporate and financial oligarchs and career bureaucrats in Washington D.C.  These are the folks that pull the strings of all administrations.  All you have to do is look at the trends that have been in place since George W Bush and continue under Obama to see what these players want.  Bigger government and thus more Federal power, more wealth for the oligarchs (thank you Federal Reserve) and an erosion of the middle class, and reduction of civil liberties in the name of the 1984-like never-ending “war on terror.”  I believe in a war on terror of my own.  A war against the terror that Washington D.C. is constantly trying to inject into your head so that you sheepishly give away all you rights and power to them.  That’s my war on terror.

The vast majority of people simply refuse to believe any of the above. They will remain in denial until the very moment at which denial becomes an impossibility. By that point it might be too late.

The NYPD clearly knows what’s coming and is rapidly preparing itself for the years ahead. As the Gothamist notes, crime has been plunging in New York City, yet the NYPD appears to be gearing up for Mad Max levels of unrest. Why? Because the thieves at the top know exactly what they have done.

Murders reached a historic low in NYC for 2014; overall crime was down across the board by nearly 5%; hell, even the holiday slowdown didn’t really lead to any additional crime. So clearly, now is the time when NYC really needs to implement a new anti-terrorism program which would empower a team of NYPD officers to roam around the city carrying machine guns. What could go wrong?

Police Commissioner Bratton made the announcement earlier today at an event hosted by the Police Foundation at the Mandarin Oriental. He said that the new 350 cop unit, called The Strategic Response Group, will be dedicated to “disorder control and counterterrorism protection capabilities” against attacks like the hostage situation in Sydney, which the NYPD’s Deputy Commissioner of Intelligence John Miller said was an inevitability in NYC.

This new squad will be used to investigate and combat terrorist plots, lone wolf terrorists, and… protests. “It is designed for dealing with events like our recent protests, or incidents like Mumbai or what just happened in Paris,” Bratton said, according to CBS.

You catch that? It’s absolutely no accident that protesters are being lumped into the same category as terrorists. Recall just yesterday I noted how the new head of the U.S. Broadcasting Board of Governors lumped network RT in with terrorist organizations. Now back to the Gothamist:

“They’ll be equipped and trained in ways that our normal patrol officers are not,” Bratton explained. “They’ll be equipped with all the extra heavy protective gear, with the long rifles and machine guns — unfortunately sometimes necessary in these instances.” Capital NY adds that these officers will also be used “to assist on crime scenes, and help with crowd control and other large-scale events.”

Bratton said Mayor de Blasio was on board, and he expected the City Council to be as well. He also said he thinks this will help improve relationships between cops and local residents.

Ah, Mr. “liberal” de Blasio is on board. Because using machine guns on protesters is so liberal. Seems increasingly clear the only thing this guy is useful for is instigating a yuppie panic about 5 inches of non-snow.

The New York Post added a little color, including the fact that the unit will be “assigned to the Counterterrorism Bureau.” See:

The Strategic Response Group, or SRG, will be devoted to “advanced disorder control and counterterrorism protection,” responding to the sort of demonstrations that erupted after the Eric Garner grand-jury decision and also events like the recent Paris terror attacks.

The unit, which will be operational by summer, will be assigned to the Counterterrorism Bureau.

Finally from the New York Times. It’s almost incredible that the first two paragraphs were written in such close proximity. Orwell is blushing as we speak:

The future of the New York Police Department will include patrol officers with more time to visit with community members and learn their concerns.

It will also include more high-powered weapons for a new unit of specially trained officers focused on patrolling terrorist targets and protests.

“It is designed for dealing with events like our recent protests or incidents like Mumbai or what just happened in Paris,” Mr. Bratton said, referring to the terrorist attacks in India in 2008 and in France this month, both carried out by small groups of men wielding assault rifles.

Meanwhile, police across the nation as so afraid of the plebs, they are calling for Congress to categorize attacks on police as “hate crimes.” See the following from Yahoo:

In the wake of the murder of two New York City police officers and a national debate about policing, the National Fraternal Order of Police is asking for the Congressional hate crimes statute to be expanded to include crimes against police officers. The union has more than 300,000 members.

Violence against police officers that is motivated by anti-police bias should be prosecuted as a hate crime, the nation’s largest police union is arguing in a letter to President Barack Obama and Congressional leaders this week.

“Enough is enough! It’s time for Congress to do something to protect the men and women who protect us,” Chuck Canterbury, the president of the union, said in a statement Monday. The group has long lobbied for harsher punishment for those who harm law enforcement officers.

Yep, enough is enough! Poor cops. Too bad violence against cops has actually been plunging. See:

In general, the number of law enforcement officers killed in the line of duty has declined since the 1970s, reflecting the fall of violent crime in the United States in general. It’s not clear who in Congress would take up the union’s call to introduce such legislation. In the past, Democrats such as Gabrielle Giffords of Arizona and Republicans such as Peter King of New York have sponsored union-backed bills.

Dear American citizens: You are considered terrorists by the oligarchs. The sooner you recognize this, the better.

It’s Not Just the Police – The Feds are Also Militarizing Public Schools with Grenade Launchers, M16s and Tanks