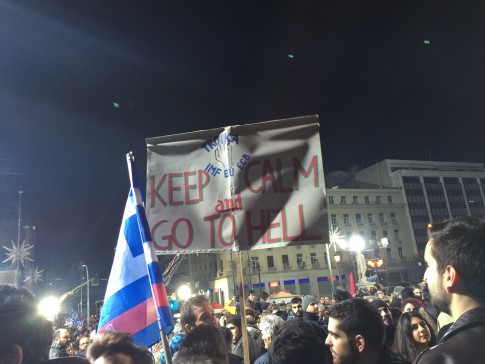 Over two years ago, we first highlighted Yanis Varoufakis’ perspectives on the destruction of Greece and Europe’s bogus growth pacts. Since then he has grown in both reason and popularity as his no-nonsense discussons of the mis-design of the euro (and potential solutions) have made him the front-runner to be Syriza’s new finance minister. Never one to  mince words or play politics, Varoufakis tells Channel 4’s Paul Mason in this brief (but chilling for Brussels) interview, what his party would do if it gets into government in Greece, and admits the prospect of power in Europe is “scary”. As he sums up, “we are going to destroy the Greek oligarchy system,” and with it, we suspect, much of the narrative that holds the fragile European Union together…

The Troika is trying to suffocate us and to put pressure on the democratic choice by telling us: either you follow our requirements, or you will be cast into hell.

They actually have their own threats as exogenous circumstances of the situation, as they are simply part. They are trying to terrorize the Greek voters.

But if no agreement is possible, or found?

So I say this clearly: “Death is preferable. “The real deficit in Greece, it is a dignity deficit. It is because of this lack of dignity that we have accepted stupid measures and this has fueled a vicious cycle of indignity which itself maintains discontent, fear and resentment. All this is not good. We must regain our dignity, spirit, October 28, 1940 made ??us say “no” to the ultimatum of Mussolini’s Italy. At this time, we do not have the means to say “no” and yet we did. (Note: 28 October 1940, the Greek dictator Metaxas refused by a “no” legendary submit to the Italian ultimatum In the war that followed, the Greeks pushed the Italian army. ).We must recapture the spirit of 28 October.