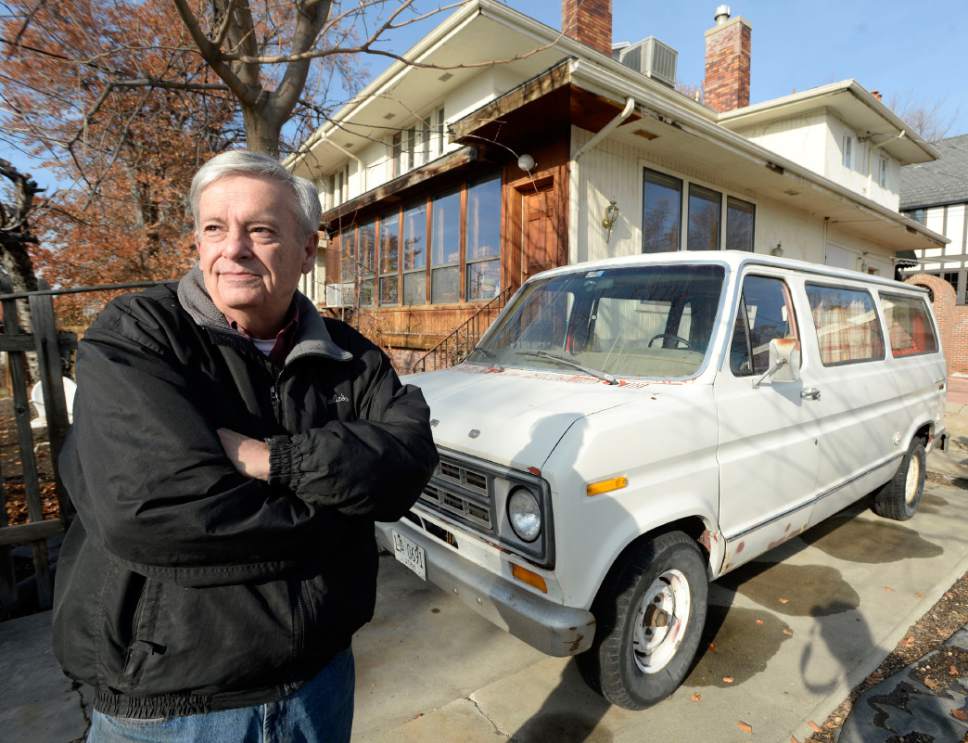 (Al Hartmann | The Salt Lake Tribune) Arman Peterson is being fined $14,400 by Salt Lake City for having two cars parked in his driveway that were unlicensed or not operable. The cars, a ’74 Ford van and a ’65 Volvo sedan were parked on his driveway at his triplex at 44 W. 500 North. He was looking for a replacement carburetor for the van and the Volvo was running. But neither was licensed. He plans on appealing the fines and is irked that he could be subject to such penalities for what he parks in his own private drive.

The crime: Resident parked an unlicensed vehicle in his own private driveway.

Arman Peterson, 70, says it isn’t right that Salt Lake City is fining him more than $14,000 because the carburetor went out in his 1974 Ford van.

A 1965 Volvo sedan that was in working condition also was parked there.

Peterson, who owns a triplex at 44 N. 500 West, said he was looking for a replacement for the carburetor when he received a notice from Salt Lake City on April 1, 2013, citing three city ordinances. One related to “outdoor storage of inoperable, unused or unlicensed” vehicles. Other citations referred to structures that needed to be “….in compliance with district regulations” and “fences and walls… shall be secured.”

In an interview, Peterson said the notice was confusing because it did not specify exactly what the city wanted. There was a neighbor’s fence that was sagging, but it does not belong to him. And he’d owned the triplex for decades with no hint that it didn’t meet all city regulations.

Another thing about the notice that caught Peterson’s eye was the statement that those Salt Lake City codes were “enacted to maintain life, health, safety and general welfare of the inhabitants of Salt Lake City.”

Maybe the notice was referring to the van, Peterson surmised. He hadn’t licensed it because it was not running. But how could his ‘74 Ford threaten anyone’s health, safety or general welfare? It wasn’t up on blocks rusting away.

“I thought that was wrong,” he said. “What they are saying is, I would have to have someone tow it to a lot and then pay them to store it.”

Irritated and a little confused, he ignored the notice. Peterson concedes that over the next year or so he would not sign for registered letters sent to his home from the city’s civil-enforcement department.

But about three weeks ago he did open a letter from City Hall. It was more like a bill or a demand notice that said he owed $14,400 in fines. It’s somewhat unclear how the total got that high, Peterson said. But the original notice outlined a fine of $25 per day for the fence and $25 a day for the van.

“That was the first I heard how much they were fining me,” he said.

Salt Lake City had earlier filed suit in 3rd District Court. Peterson represented himself, he said, telling the judge the citations were not fair.

The city pulled back the suit and a motion for summary judgment against Peterson in hopes an agreement could be reached, said City Hall spokesman Art Raymond.

“Enforcement action is a complaint-based process,” Raymond said. “Enforcement officers are not out looking for violations. They were responding to complaints by his neighbors.”

Peterson can appeal the fine before a city hearing officer. Raymond said it is likely the fine could be “dramatically” reduced. The city would set up a payment plan, he added, so that Peterson could more conveniently retire any fine.

The municipality tries to be flexible on code violations, Raymond said. If Peterson had called City Hall he most likely could have received an extension while he fixed and licensed his vehicle.

Nonetheless, the whole thing strikes Peterson as un-American. “I didn’t serve our country in the armed forces so I could be fined for parking in my own driveway.”

1 thought on “Salt Lake City Fines Veteran $14,400 For Parking Dead Van In His Own Driveway”