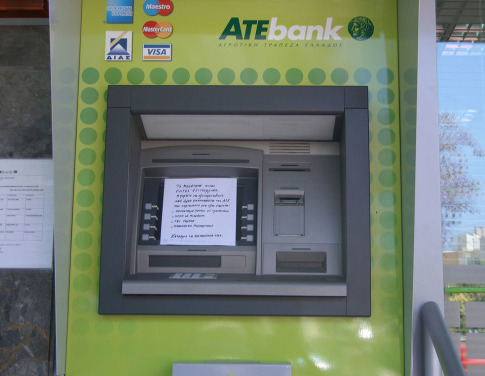 With just three weeks until the Greek snap elections on January 25 in which Tsipras’ Syriza is virtually assured of victory (unless somehow G-Pap’s “new and improved” political party manages to steal enough votes to prevent this, although one wonders what his political campaign will be: “vote for us because this time we know how to avoid a sovereign bankruptcy”), Germany takes yet another opportunity to remind the Greeks that it won’t be blackmailed (spoiler: it will) into another year of funding the insolvent Greek state which in turn will pretend to engage in another year of “reforms” (spoiler: it won’t). Recall it was on New Year’s Eve when Merkel’s chief advisor Michael Fuchs explicitly used the “blackmail” word saying:

“If Alexis Tsipras of the Greek left party Syriza thinks he can cut back the reform efforts and austerity measures, then the troika will have to cut back the credits for Greece,” he said.

“The times where we had to rescue Greece are over. There is no potential for political blackmail anymore. Greece is no longer of systemic importance for the euro.”

Today, concerned that Tsipras’ ascent to power will mean precisely that, namely more “blackmail” by Greece of Germany and the Eurozone, as a Grexit opens the way for a collapse of the monetary union and a return to the Deutsche Mark which would cost Germany far more than continuing the annual charade of keeping Greece in the Euro, Spiegel is out with another piece saying “Bundesregierung hält Ausscheiden Griechenlands aus dem Euro für verkraftbar“, or loosely translated, the Federal Government considers Greece’s exit from the euro manageable.

In the article Spiegel says, per Bloomberg, that German Chancellor Angela Merkel and Finance Minister Wolfgang Schaeuble, contrary to the German government’s previous stance, consider a Greek exit from the euro area to be manageable because of progress made since height of sovereign debt crisis in 2012, Der Spiegel reports in e-mailed summary of article, citing unidentified people close to govt.

Risk of contagion is limited because Portugal and Ireland have addressed their fiscal issues and ESM is ready as rescue mechanism while security of large banks to be maintained through banking union.

European lawmakers don’t know how a country could leave the euro while remaining in the EU and would have to task legal experts with clarifying issue.

Worse, a Grexit now would mean all hopes of ECB QE would be put on indefinite hiatus until the legal framework of not only funding sovereign deficits but also monetizing bonds from an imploding Eurozone is justified. It also means that peripheral bonds, which have priced in well over 100% of a European QE, would go bidless overnight, leading to market crashes across the continent, then to bank runs first across the periphery then the core, and ultimately lead to a full-blown European depression.

Reality aside, why is Spiegel going with this now? Simple: moments ago Tsipras made some headlines of his own, making it very clear just what will happen if and when his party wins the election in 3 weeks.

And in detail, from Bloomberg:

Syriza’s win in forthcoming Greek snap elections will pave way for progressive policy change in Europe against German Chancellor Merkel’s austerity, party leader Alexis Tsipras says according to e-mailed transcript of speech in Athens today, with Podemos in Spain, Sinn Fein in Ireland to follow. Syriza will guarantee bank deposits. [ZH: curious, just how would Syriza do that?]. “Syriza will put an end to social tragedy, nightmare of austerity.”

As for the punchline, on one hand we have this:

Alas Syriza does not get that one is incompatible with the other, and in fact a Greek debt write off means no more ECB QE as the ECB’s balance sheet – a proud holder of tens of billions of insolvent Greek debt still marked to par – would become impaired, and thus crush any political capital Draghi may have left with the Germans and the Bundesbank.

That said, the consensus can certainly forget the ECB announcing public QE at its next monetary policy meeting on January 22, which will be followed just 3 days later by the Greek national elections. In fact, things in the coming weeks and months may get very ugly, fast depending on how things in Greece play out. 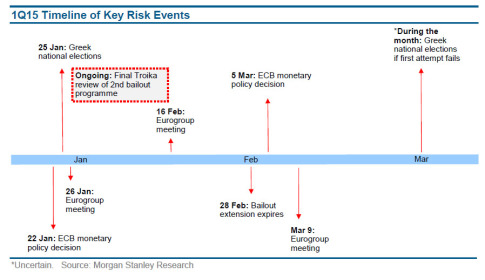 So after 3 years of kicking the can and pretending it is fixed, suddenly everything that is broken in the Eurozone threatens to float right back to the surface, leading to another showdown when photos such as this one become a daily occurrence.

The only question is whether this time anyone will believe the rhetorical “whatever it takes” threats uttered by the one central bank which for the past 4 years has proven it is utterly incapable of acting, instead chosing to talk each and every day, a strategy that has worked brilliantly, until now.