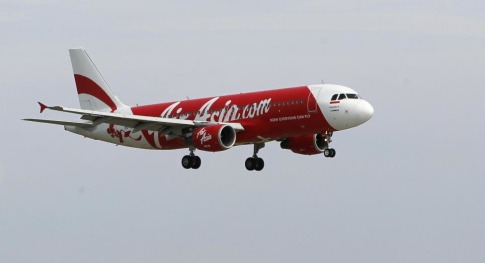 About 12 hours after AirAsia flight QZ8501 with 162 people on board disappeared and lost all contact with Jakarta air traffic control at 6:17 am local time (11:17 pm GMT Saturday), the aircraft searching for any clue of what may happened to the second unexplained disappearance of an airplane flying in the region, have been called off due to nightfall even as ships will continue their search through the night. As Sky News reported, “Rescuers scouring the Java Sea have halted their search because it is getting dark, Indonesia’s transport ministry said.  Hadi Mustofa said: “We ended at 5:30 pm (1030 GMT) because it was getting dark. The weather was also not too good as it was getting really cloudy. “Tomorrow we will begin at 7 am, or even earlier than that if the weather is good.”

For those who missed the coverage last night, here is what is known so far, via Reuters:

On board were 155 Indonesians, three South Koreans and one each from Singapore, Malaysia and Britain, plus a French pilot, the airline said in a statement, correcting earlier information. Tatang Kurniadi, head of Indonesia’s National Committee of Safety Transportation, expressed hope of locating the aircraft quickly and said it was too early to detect any of the so-called electronic pings from its black box recorder.

“We are using our capacity to search on sea and land. Hopefully we can find the location of the plane as soon as possible,” he told a news conference.”What I need to emphasize is until now, we have not found out how the plane fell or what kind of emergency it was.”

Indonesia AirAsia is 49 percent owned by Malaysia-based budget carrier AirAsia (AIRA.KL), which has had a clean safety record since it began operating 13 years ago. The AirAsia group also has affiliates in Thailand, the Philippines and India. The aircraft had accumulated approximately 23,000 flight hours in some 13,600 flights, according to Airbus (AIR.PA).

The pilots of QZ8501 “was requesting deviation due to en-route weather before communication with the aircraft was lost,” the airline said in a statement. Singapore, Malaysia, Britain, South Korea and Australia offered to help in the search and any investigation. Malaysia said it was sending vessels and a C130 aircraft while Singapore had also sent a C130. Australian Prime Minister Tony Abbott said a P3 Orion aircraft was on standby if needed.

The suggested location of the disappearance is shown in the map below: Flight QZ8501 was between Tanjung Pandan on Indonesia’s Belitung island and Pontianak, in West Kalimantan province on Borneo – almost halfway between Surabaya and Singapore – when it went missing. There was bad weather over Belitung at the time and the aircraft had been flying at 32,000 feet before asking to fly at 38,000 feet to avoid clouds. 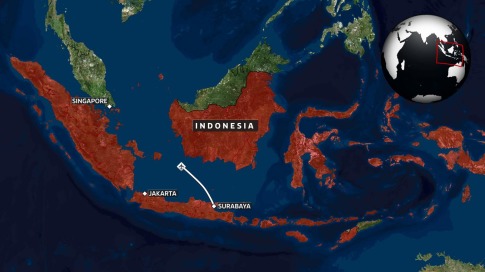 While AirAsia chief Tony Fernandes said it is too early to say what happened to flight QZ8501 and every assistance must be given to the search and rescue effort some are thanking their lucky stars they avoided it in the last moment:

A man named Purnomo told TVOne in Surabaya of a lucky escape. “I should have been on the flight,” he said. “We, seven people, had planned to go to Singapore for vacation but this morning I had an emergency. I had my passport in hand.”

Tony Fernandes, chief of Malaysia’s AirAsia, said he was heading to Surabaya. “My only thoughts are with the passengers and my crew. We put our hope in the SAR (search and rescue) operation and thank the Indonesia, Singapore and Malaysian governments,” he said on Twitter.

Others were not so lucky:

Louise Sidharta was at Singapore’s Changi Airport waiting for her fiancée to return from a family holiday. “It was supposed to be their last vacation before we got married,” she said.

Some other known facts: the pilot of the missing plane had 20,000 hours of flying experience – 7,000 of which were with AirAsia. It has yet to be revealed if like the pilot of missing flight MH-370 he too had a flight simulator at home on which he was training landing at unexpected venues. As a reminder, 9 months later there is still no trace of the missing MH-370, which as we reported recently, a former airline CEO shocking claimed it was shot down by the US.

Below is the plane’s full Flight Dispatch Release courtesy of Aviation Safety.