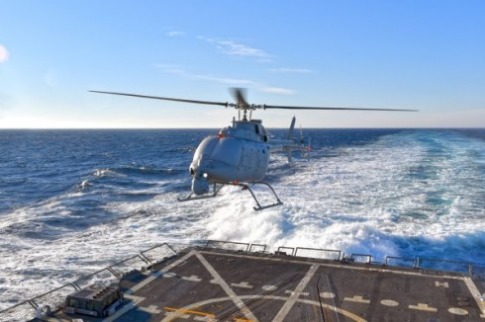 A helicopter drone developed by Northrop Grumman Corp. has made its first flight from a U.S. Navy destroyer, the company announced.

The MQ-8C Fire Scout on Dec. 16 completed 22 autonomous takeoffs and landings aboard the guided-missile destroyer, USS Jason Dunham (DDG 109), off the coast of Norfolk, Virginia, according to a Dec. 23 release from the Falls Church, Virginia-based defense contractor.

“This is the first sea-based flight of the MQ-8C and the first time an unmanned helicopter has operated from a destroyer,” Capt. Jeff Dodge, who manages the program for Naval Air Systems Command, said in the release. The technology offers greater endurance, he added, allowing “ship commanders and pilots to have a longer on station presence.”

The unmanned aircraft is the largest of three versions developed since 2002. Based on the Bell 407 helicopter, it’s designed in part for cargo resupply missions. While undergoing initial testing aboard destroyers, the drones will eventually fly from the Navy’s new Littoral Combat Ships, at least according to the current plans.

During the recent test flights, the aircraft was autonomously controlled from the ship’s control ground station. Northrop was also the company behind the Navy’s X-47B drone, which made history last year when it landed aboard an aircraft carrier.

George Vardoulakis, Northrop’s vice president for medium range tactical systems, said the MQ-8C evaluations “are an essential part in clearing the operational envelope of the system and are proving the system’s ability to operate off any air-capable ship. We are on track to validate all of the critical performance parameters of this Navy asset and ready the system for deployment and operational use.”

The drone is slated to begin flying actual missions in 2016, according to the Navy. Previous versions of the aircraft have been used to support missions in such countries as Afghanistan and Libya. In fact, forces loyal to the late Libyan ruler Muammar Gaddafi in 2011 shot down an MQ-8B during a reconnaissance mission.

The service plans to buy almost 30 MQ-8Cs to support U.S. Africa and Special Operation Commands. The aircraft has an operational range of about 150 nautical miles and payload capacity of more than 700 pounds.

Here’s video of the MQ-8C flights from the Dunham: