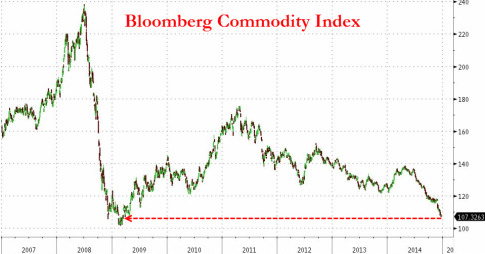 Moments ago we learned that for all talk of a commodity “bottom”, the “energetic” dead cat has resumed its inverse bounce. To wit:

So what does that mean? The answer: it all depends on whose narrative one chooses to believe and/or which narrative the US Ministry of truth is promoting on any given day in order to boost confidence.

The main plotline now is simple: plunging commodity prices (just don’t call them deflation, “negative inflation” is much better) are a huge tax cut on the US consumer the pundits will have you know. And why not: so simple a Jonahtan Gruber could have come up with it.

The only problem is that you learn all this from the same pundits who told you just a few months ago, that soaring commodity prices are great for the economy, for jobs, and, drumroll, for the consumer.

Booming US energy sector feeds manufacturing, may overtake it

Could the booming U.S. energy sector assume the mantle that Detroit’s big automakers once held in the economy? Although it’s still too early to tell, recent trends suggest soaring energy production may replace automobile manufacturing as an economic powerhouse. Even as the U.S. recovery falters, manufacturing and energy are in the midst of a broad expansion that is helping to generate growth.

In a study released in early February, The Boston Consulting Group said shale gas “will have a greater impact on U.S. manufacturing over the next several years than is commonly assumed,” as cheap gas makes manufacturing more competitive—and becomes a major source of jobs and growth in its own right.

“This is why our economy is starting to wake up,” Sirkin said. “We are looking like a growth country compared to developed countries and emerging markets.”

Oil and gas employment has been one of the few sources of job growth in a fallow labor market, with direct employment soaring 40 percent since 2007. According to a study by consulting firm PriceWaterhouseCoopers, the shale revolution may add as much as one million manufacturing workers by 2025, due “to benefits from affordable energy and demand for products used to extract the gas.”

“Absolutely, the energy sector can be a basis for the U.S. becoming an industrial powerhouse,” said Ken Ditzel, a principal at Charles River Associates who performed the data analysis for the America’s Energy. “It’s clear that the developments in the energy sector are feeding the manufacturing renaissance.”

Well so much for that narrative, because with WTI in the mid$-50s where it is now (or lower), the only industry that will boom as a result of shale is that of bankruptcy attorneys and restructuring advisors.

So what is the narrative now? Best to put the whole shale “angle” on the back burner and just focus on the Grubering of the story. Case in point, here is CNBC yet again, this time with the counter-narrative, from “Falling gas prices seen as early Christmas gift for consumers”

As falling oil prices stoke worries about flagging demand and a weakening global economy, some are pointing to the silver lining that lower energy costs could shine on consumers.

With this global slowdown, you’re starting to see a real meltdown in the oil and petroleum markets, which obviously affects the stock market because it affects the oil companies,” he said. “But it is a huge tax cut for the world. The market right now is so absorbed with the negatives, there’s some huge positives that are coming out of this.”

In a research note released on Wednesday, Joseph LaVorgna and Brett Ryan of Deutsche Bank broke down the effect that lower gas prices could have on the economy.

With retail gas prices down to $3.30 per gallon as of Oct. 6 from a peak of $3.70 in June, LaVorgna and Ryan wrote, “this 40 cent decline in prices will give U.S. households a significant lift to their cash flow.” For every 1 cent that consumers save on gasoline, Deutsche Bank calculates that U.S. households can spend about $1 billion more in the broader economy.

And of course there is Goldman who as recently as July said “the long awaited global recovery appears to be getting on track, lifting commodity demand”: 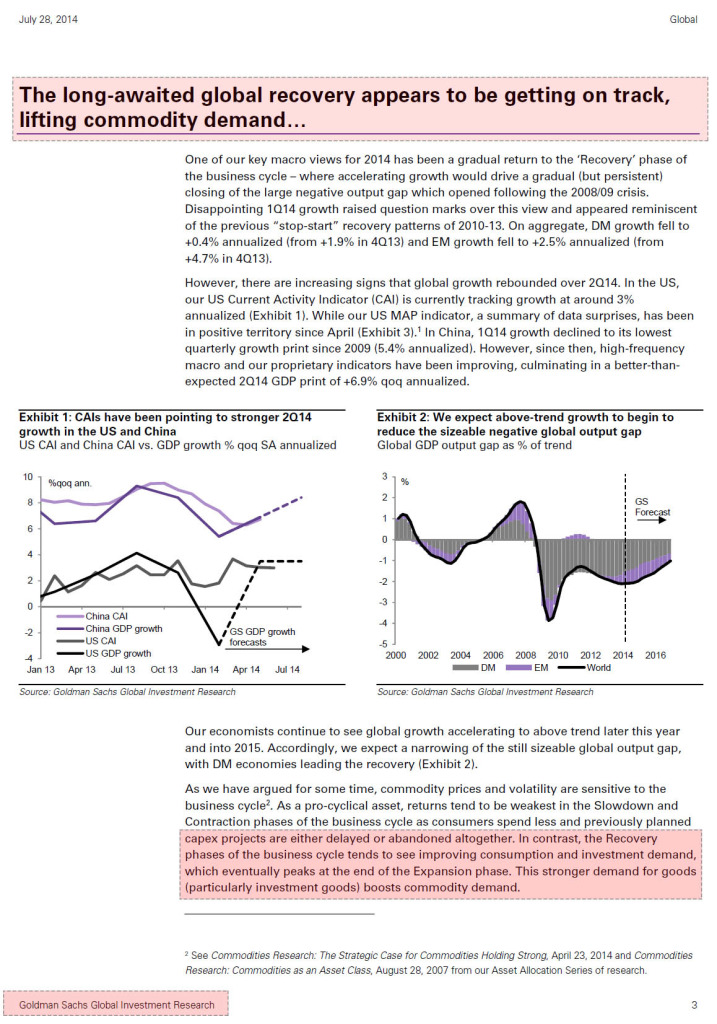 And to think Austrian economists have a bad rep.

So the bottom line for all those wondering if the commodity plunge to the lowest level since 2009 is good or bad, now you know the answer. Or rather, have no idea whatsoever.

1 thought on “Bloomberg’s Commodity Index Drops To Lowest Since 2009: What Does It Mean?”