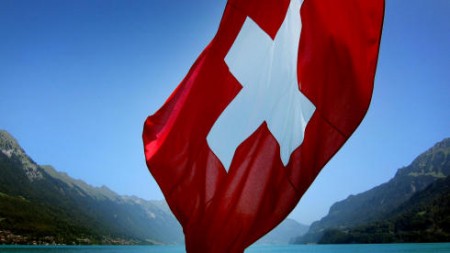 Everyone thought that any major monetary policy surprises and/or capital controls today would come from Putin during his annual press conference. Boy were they wrong: just after 2 am Eastern, none other than the Swiss National Bank joined the ranks of the ECB in scrambling to stem the wave of capital flight, not to mention the cost of money, when it announced it too would start charging customers for the privilege of holding cash in its banks, when it revealed a negative, -0.25% interest rate on sight deposits: a step which according to the SNB was critical in maintaining the 1.20 EURCHF floor.

The Swiss National Bank (SNB) is imposing an interest rate of –0.25% on sight deposit account balances at the SNB, with the aim of taking the three-month Libor into negative territory. It is thus expanding the target range for the three-month Libor to –0.75% to 0.25% and extending it to its usual width of 1 percentage point. Negative interest will be levied on balances exceeding a given exemption threshold.

The SNB reaffirms its commitment to the minimum exchange rate of CHF 1.20 per euro, and will continue to enforce it with the utmost determination. It remains the key instrument to avoid an undesirable tightening of monetary conditions resulting from a Swiss franc appreciation. Over the past few days, a number of factors have prompted increased demand for safe investments. The introduction of negative interest rates makes it less attractive to hold Swiss franc investments, and thereby supports the minimum exchange rate. The SNB is prepared to purchase foreign currency in unlimited quantities and to take further measures, if required.

The factors from the “past few days” in question that the SNB was envisioning to justify becoming the latest entrant to the NIRP monetary twilight zone: Russian capital flight. Per Bloomberg, “the SNB move follows Russia’s surprise interest-rate increase this week and hints at the investment pressures that resulted after that decision failed to stem a run on the ruble. Swiss officials acted as the turmoil, along with the imminent threat of quantitative easing from the ECB, kept the franc too close to its 1.20 per euro ceiling for comfort.”

“This is not the magic bullet, but will buy them time,” said Peter Rosenstreich, head of market strategy at Swissquote in Gland, Switzerland. “This will relieve pressure from the floor in the short term, but not in the long term.”

To be sure, Russia’s recent shocking rate hike to 17% was a factor in the Swiss decision. Then again to say that a few Russian billionaires took on the SNB and forced it to do a historic monetary policy move would be just a little bit naive. Surely, the reason for the capital flight had much more to do with the capital flight from “everywhere” as a result of the latest market turbulence which has seen a major flight out of risk assets and into fixed income assets, and also safe-haven currencies, at least until Janet Yellen’s “renormalization” statement yesterday which purely coinicdentally had both keywords sought for by algos: “considerable time” and “patient.”

What was also left unsaid is that the Swiss central bank is also worried about the pressure from the Eurozone as the ECB launches full-blown QE in 2015. And in a purely reflexive fashion, the SNB move also makes it that much more likely that the ECB itself will have to act even further, as central bank actions have now become a tit for tat exchange with other central banks in creeping global capital controls, even if nobody is willing to call it for what it is. One thing is clear: if and when the ECB does more, the SNB will again have no choice but to respond: as Bloomberg strategist Richard Jones writes “SNB’s decision today to introduce negative rates of -0.25% next month may be escalated if external factors like a large scale QE from ECB threatens the EUR/CHF floor, analysts say, adding that FX interventions will likely continue. Jan. 22 start date for SNB’s negative interest on sight deposits coincides with next ECB meeting, increasing the likelihood of QE announcement by the latter next month.”

In any event, at least the Swiss were kind enough to give the Russians an advance notice that their cash is not welcome in the country. After all Russian billionaires could have been merely “Cyprused”, all over again.

Finally, here is Goldman’s take on the SNB move:

Bottom line: The Governing Board of the SNB surprisingly announced this morning that it will introduce a negative rate of -0.25% on sight deposit account balances at the SNB. The SNB’s target range for the three-month Libor was also widened from 0.0% – +0.25% to -0.75% – +0.25%. In our view, today’s rate decision simply underlines the determination of the SNB to enforce the minimum exchange rate target for the CHF against the Euro.

1. This morning, the SNB surprisingly announced that, on January 22, it will introduce a negative interest rate of -25bp on reserve holdings from banks at the SNB, above a threshold of 20 times the minimum reserve requirement. The SNB’s target range for the three-month Libor was also widened from 0.0% – +0.25% to -0.75% – +0.25%. Over the last couple of days, the CHF has traded very close to the 1.20 level on the back of rising market volatility. The subsequent demand for safe investments attracted large capital inflows into Switzerland, eventually prompting the SNB to react.

2. According to the SNB, the measure is aimed at making investments into CHF less attractive. Although it is only banks that will have to pay the negative deposit rate, banks will pass on, to some extent at least, the negative rates to customers. It is noteworthy in that respect that some German banks – in response to the ECB’s negative rates – have also started charging some clients negative deposit rates.

3. It remains to be seen how effective this measure will be and the SNB will continue to rely on FX interventions to defend the minimum exchange rate. But the measure in any case shows the determination of the SNB to maintain the lower bound for the CHF against the Euro.