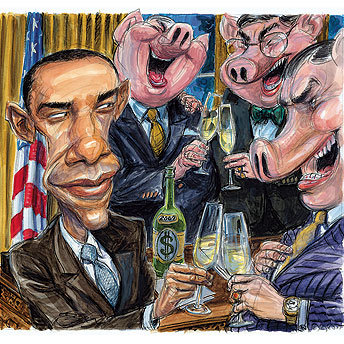 President Barack Obama on Tuesday signed a $1.1 trillion spending bill passed by Congress last week that lifted the threat of a government shutdown.

The legislation funds most government agencies through September 2015. The Department of Homeland Security will be treated differently, getting a funding extension only through Feb. 27, by which time Republicans will control both chambers of Congress.

Passage of the 1,603-page bill was a long struggle in the Senate and the House of Representatives marked by bitter disputes over changes to banking regulations and Obama’s recent executive order on immigration. 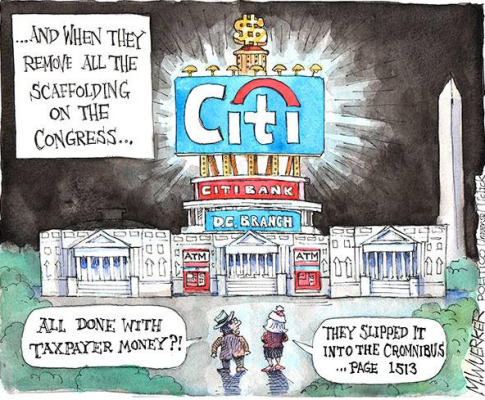 Martin Armstrong via Armstrong Economics, has some strong opinions…

Believe it or not, Citigroup announced on Friday that it would move its headquarters from New York to the actual U.S. Capitol Building, in Washington, D.C., in early 2015. Yes! They might as well had since they got everything they wanted… Could you imagine.

Citi outbid JP Morgan and Goldman Sachs to lease thirty thousand square feet of prime real estate on the floor of the House of Representatives.

This is just jumping off the cliff. Not only did these people grease enough palms to repeal Dodd Frank, they are now virtually leasing space right in the Capital Building and managed to increase the donation limitation from $32,400 to $324,000. They own Congress.

Well as they say – there goes the neighborhood. The real problem we face is when you take polls on the job performance on Capitol Hill, we will have to ask which group? Looks like the clouds are starting to gather for 2015.75 in a very dramatic way. Maybe it is just time to leave. Oh ya.

This is fulfilling the lyrics of the Eagle’s song Hotel California – where you can check out any time you like, but you can never leave.

The banking giant Citigroup announced on Friday that it would move its headquarters from New York to the U.S. Capitol Building, in Washington, D.C., in early 2015.

Tracy Klugian, a spokesperson for Citi, said that the company had leased thirty thousand square feet of prime real estate on the floor of the House of Representatives and would be interviewing “world-class architects” to redesign the space to suit its needs.

According to sources, Citi successfully outbid other firms, including JPMorgan Chase and Goldman Sachs, for the right to move its headquarters to the House floor.

The Citi spokesperson acknowledged that the extensive makeover of the House is expected to cost “in the millions,” but added, “It’s always expensive to open a new branch.”

Explaining the rationale behind the move, Klugian told reporters, “Instead of constantly flying out from New York to give members of Congress their marching orders, Citigroup executives can be right on the floor with them, handing them legislation and telling them how to vote. This is going to result in tremendous cost savings going forward.”

Klugian said that Citi’s chairman, Michael E. O’Neill, will not occupy a corner office on the House floor, preferring instead an “open plan” that will allow him to mingle freely with members of Congress.

“He doesn’t want to come off like he’s their boss,” the spokesperson said. “Basically, he wants to send the message, ‘We’re all on the same team. Let’s roll up our sleeves and get stuff done.’ ”