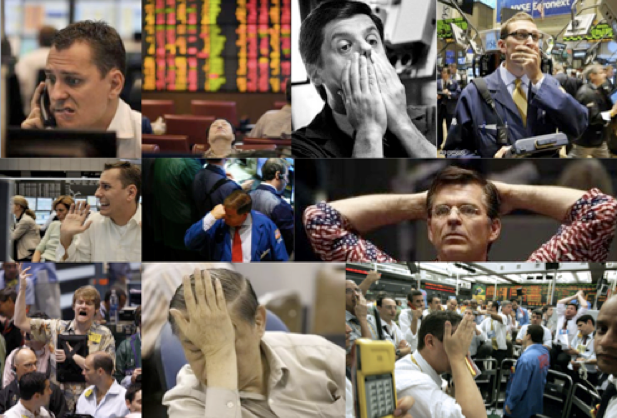 Is this the start of the next major financial crisis?  The nightmarish collapse of the price of oil is creating panic in financial markets all over the planet.  On June 16th, U.S. oil was trading at a price of $107.52.  Since then, it has fallen by almost 50 dollars in less than 6 months.  This has only happened one other time in our history.  In the summer of 2008, the price of oil utterly collapsed and we all remember what happened after that.  Well, the same patterns that we witnessed back in 2008 are happening again.  As the price of oil crashed in 2008, so did prices for a whole host of other commodities.  That is happening again.  Once commodities started crashing, the market for junk bonds started to implode.  That is also happening again.  Finally, toward the end of 2008, we witnessed a horrifying stock market crash.  Could we be on the verge of another major one?  Last week was the worst week for the Dow in more than three years, and stock markets all over the world are crashing right now.  Bad financial news continues to roll in from the four corners of the globe on an almost hourly basis.  Have we finally reached the “tipping point” that so many have been warning about?

What we witnessed last week is being described as “a bloodbath” that was truly global in scope.  The following is how Zero Hedge summarized the carnage…

The stock market meltdown in Greece is particularly noteworthy.  After peaking in March, the Greek stock market is down 40 percent since then.  That includes a 20 percent implosion in just the past three trading days.

And it isn’t just Greece.  Financial markets all over Europe are in turmoil right now.  In addition to crashing oil prices, there is also renewed concern about the fundamental stability of the eurozone.  Many believe that it is inevitable that it is headed for a break up.  As a result of all of this fear, European stocks also had their worst week in over three years…

European stock markets closed sharply lower on Friday, posting their biggest weekly loss since August 2011, as commodity prices continued to fall and and shares in oil-related firms came under renewed pressure from the weak price for crude.

The pan-European FTSEurofirst 300 unofficially ended 2.6 percent lower, down 5.9 percent on the week as the energy sector once again weighed heavily on wider benchmarks, falling over 3 percent.

But despite all of the carnage that we witnessed in the U.S. and in Europe last week, things are actually far worse for financial markets in the Middle East.

Stock markets in the Persian Gulf got drilled Sunday as worries about further price declines grew. The Dubai stock index fell 7.6% Sunday, the equivalent of a 1,313-point plunge in the Dow Jones industrial average. The Saudi Arabian market fell 3.3%.

Overall, Dubai stocks are down a whopping 23 percent over the last two weeks, and full-blown stock market crashes are happening in Qatar and Kuwait too.

Like I said, this is turning out to be a truly global financial panic.

Another region to keep an eye on is South America.  Argentina is a financial basket case, the Brazilian stock market is tanking big time, and the implied probability of default on Venezuelan debt is now up to 93 percent…

Swaps traders are almost certain that Venezuela will default as the rout in oil prices pressures government finances and sends bond prices to a 16-year low.

Benchmark notes due 2027 dropped to 43.75 cents on the dollar as of 11:35 a.m. in New York, the lowest since September 1998, as crude extended a bear market decline. The upfront cost of contracts to insure Venezuelan debt against non-payment for five years is at 59 percent, bringing the implied probability of default to 93 percent, the highest in the world.

So what does all of this mean for the future?

Are we experiencing a repeat of 2008?

Could what is ahead be even worse than that?

Or could this just be a temporary setback?

Recently, Howard Hill shared a few things that he looks for to determine whether a major financial crisis is upon us or not…

The first condition is a serious market sector correction.

According to some participants in the market for energy company bonds and loans, such a correction is already underway and heading toward a meltdown (the second condition). Others are more sanguine, and expect a recovery soon.

That smaller energy companies have issued more junk-rated debt than their relative size in the economy isn’t under debate. Of a total junk bond market estimated around $1.2 trillion, about 18% ($216 billion, according to a Bloomberg estimate) has been issued by energy-related companies. Yet those companies represent a far smaller share of the economy or stock market capitalization among the universe of junk-rated companies.

If the beaten-down prices for junk energy bonds don’t stabilize or recover a bit, we might see the second condition: a spiral of distressed sales of bonds and loans. This could happen if junk bond mutual funds or other large holders sell into an unfriendly market at low prices, and then other holders of those bonds succumb to the pressure of fund redemptions or margin calls and sell at even lower prices.

The third condition, which we can’t determine directly, would be pressure on Credit Default Swap dealers or hedge funds to make deposits as the prices of the CDS move against them. AIG was taken down when collateral demands were made to support existing CDS agreements, and nobody knew it until they were going under. There simply isn’t a way to know whether banks or dealers are struggling until the effect is already metastasizing.

I think that he makes some really good points.

In particular, I think that watching how junk bonds perform over the next few weeks will be extremely telling.

Last week was truly a bloodbath for high yield debt.

But perhaps things will stabilize this week.

Let’s hope so, because this is the closest that we have been to another major financial crisis since 2008.