In late 2006, default rates on lower-rate subprime private MBS began to rise considerably. Though not a very transparent market to the mainstream media-watching world, bankers knew trouble was brewing as this had not happened before in such a benign house price decline. Banks, knowing what they had on their books, what they had sold to others, and what that meant for risk, began quietly buying protection on other banks as counterparty risk became a daily worry for desks across Wall Street.

The stocks of US financials continued to rise amid “contained” and “no problem” comments from the status quo but credit spreads for the major US banks kept leaking wider even as stocks rallied… then reality dawned on stocks and the rest is history. 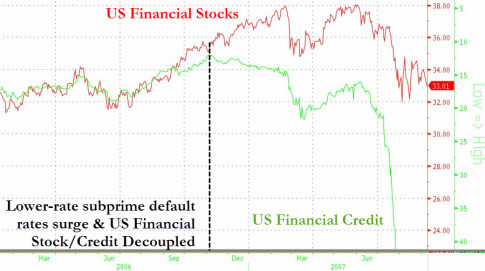 Today, US financial credit spreads (wider) have decoupled once again from stocks (higher) and that divergence began as oil prices started to slump. 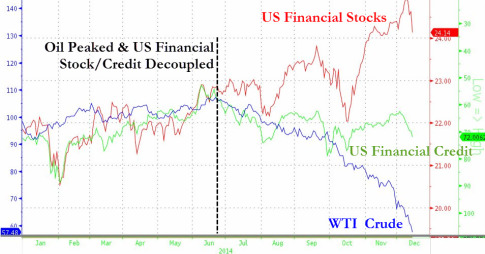 Are banks hedging counterparty risk once more ‘knowing’ what loans and exposures they have to the massively levered US oil industry? Or is it different this time?