Just 2 short months ago we noted S&P’s warning that Greece will default again within 15 months and following comments by Prime Minister Samaras that the market’s drop is due to fear that Syriza will win an early election and seek a Greek exit from the Euro. Pressuring parliamentarians and the public alike, he stated “the choice is simple,” warning that Greek financing needs are only covered through the end of February without further aid from the EU (but we thought they were ‘recovered’). Greek stocks have crashed further, Greek default risk has spiked, and 3Y bond yields are now well north of 10% (138bps inverted to 10Y).

Greece will get next tranche of its bailout loan; if we have elections everything is “up in the air”

Samaras calls on all Greek lawmakers to assume their responsibility; says choice is simple, president or early elections

A further plunge in stocks… 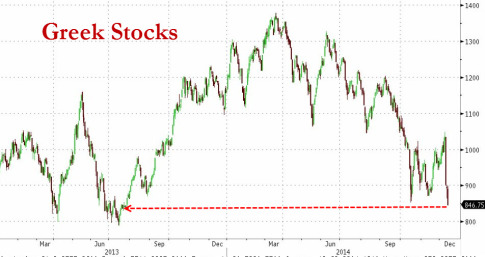 and a spike in Greek default risk 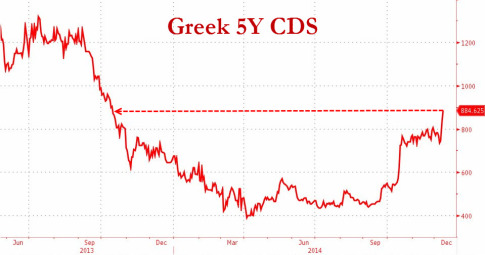 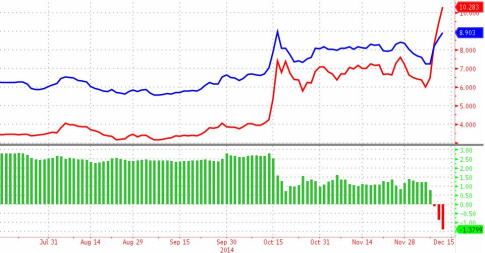 And about those new 5Y bonds that proved Greece was fixed… 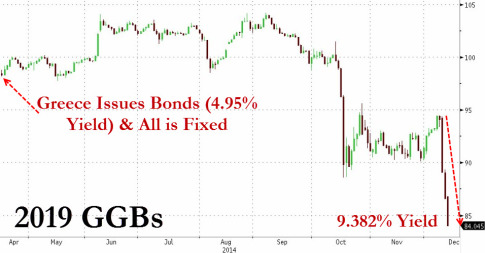 Greece will hold snap general elections in January if parliament fails to elect a president this month, Prime Minister Antonis Samaras said on Thursday as he called on all lawmakers to avert a national crisis by supporting his candidate for head of state.

“We will all be judged in the coming days,” Samaras said in a speech to lawmakers from his conservative New Democracy party. “People do not want elections.”

If the government wins the vote to elect a president, the country will complete a pending bailout review, seek debt relief from European partners and sign a precautionary credit line to support the country after the aid program ends, Samaras said.

He said Greece’s funding needs were covered until the end of February. Responding to speculation that the government might put forward different nominees in the three presidential vote rounds, Samaras said Stavros Dimas would remain the government candidate in all three rounds.