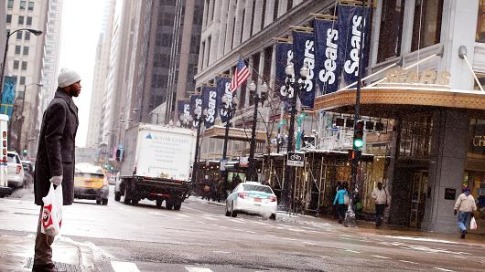 Banners hang from Sears’ flagship store in the Loop on January 22, 2014 in Chicago, Illinois.

Sears shares fell Thursday, after the struggling department store announced an adjusted net loss of $296 million—in line with the updated guidance it gave in November.

The retailer also said it’s accelerating the number of stores it plans to close this year, boosting its list from the 130 underperforming stores it announced in its second-quarter earnings release, to a total of 235 stores.

Analysts called the move a step in the right direction for the company, which has been tapping into its real estate in creative ways to compensate for downward-spiraling sales. Still, they said the haircut won’t be enough on its own to turn the tide at Sears, adding that it needs to close even more stores—and figure out how to become profitable.

“This is the primary problem remaining at Sears, as management needs to find a way to stop the over $1 billion of negative cash flow that is undermining the positive repositioning moves,” Credit Suisse analyst Gary Balter said.