UPDATE: MH17/MIG photo not likely to be from a satellite 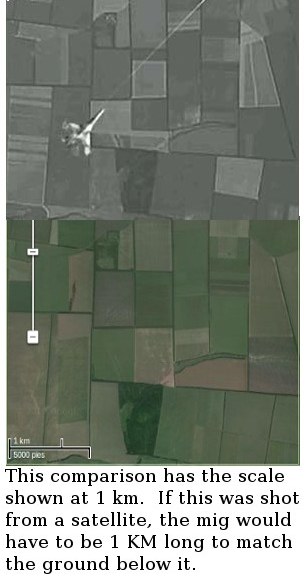 To the left I have the original, as presented, and a clip from Google maps showing the exact same location, with the distance scale still embedded in the Google map image. If this was shot from outer space, the Mig would have to be 1 KM long to match the ground below it. The only way this shot could possibly be real is if it was shot from a higher flying aircraft. Did reputable Russian media get spoofed? That is a strong possibility.

I was hoping the Russian Navy was at Australia to give Putin a safe ride back absent any chance of remote hijacking or shoot downs after he “presented this photo”. There are three possibilities here, and they are:

Take your pick for now, let’s see how Putin leaves Australia. If he leaves with the Navy that will probably say it all.

discuss this on the Forum

On the 14th, the night before the G20 summit in Brisbane, Putin revealed a photograph intercepted from an American spy satellite that proves MH17 was shot down by a jet capable of hitting 35,000 feet.

UPDATE: This move by Putin is probably why the Russian Navy is just off the coast of Australia. My guess is Putin will return to Russia that way. 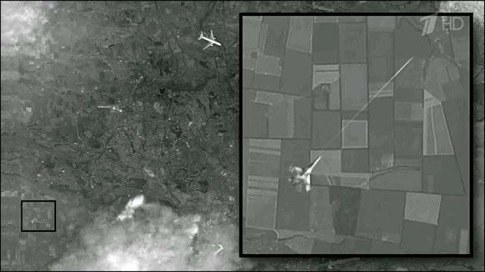 The direction of the entry holes in the cockpit region match this photograph.

This opens several questions and reveals some startling facts that Putin probably did not want to give up.

First question – why was a spy satellite focused on this shoot down right when it happened? Spy satellites are a limited resource, and the fact one was positioned to watch the shoot down proves it was no accident.

Additionally, it proves the Buk missile story to be false, for what reason was that story told and pushed in the ziopress?

Second really big issue here, which would explain why Putin held onto this so long – it proves beyond a doubt that Russia has a perfect hack on American spy satellites. That is not the type of information someone like Putin would be excited to release. Why did he do it?

This photograph proves the only possible technical reason for the downing of MH17 was deliberate shoot down by a Mig 29 fighter jet, the best thing Ukraine has. This explains why no one on the ground ever saw a Buk missile launch in relation to this downing.

George Bilt of MIT agreed 100 percent with Putin’s analysis of the photo and stated that beyond all doubt, this was the reason of the shoot down. The satellite photo, which shows a missile launch from the left wing of the fighter jet is verified genuine because of the orientation of the fields on the ground below it, which match the shoot down scenario perfectly.

Original report is HERE discuss this on the Forum