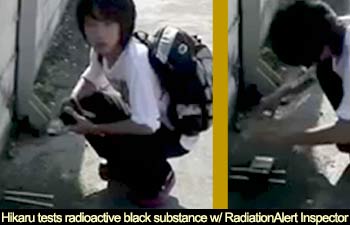 – Fukushima Student: “It seems like we are about to get killed” — “Anyone, please, please save the lives of Fukushima people and children… Gov’t abandoned us… Japan is clearly going insane… Nothing has gotten better” (VIDEO) (ENENews, Nov 13, 2014):

IMDb – Kakusei: The Fukushima End (2014), Blondion Productions: Today the Japanese government assures its people of Fukushima’s safety and urges residents to move back. However, citizens are not convinced… Through the experiences of five individuals, this documentary reflects upon how culture has influenced the choices citizens make everyday, and how those have changed.

The documentary is extremely well produced. Its thoughtful subject matter, eye-catching cinematography and excellent sound design will hopefully soon be seen by millions. According to the film’s official trailer posted last year, “We are currently in need of funding to complete and distribute the film. Please lend your support and donate: http://www.blondion.com/support.”

This letter by Tomoko Hatsuzawa, a mother in Fukushima City, expresses sentiments similar to those shared by Hikaru. Hatsuzawa gave the letter to Hiroko Tabuchi of The New York Times, who also translates: “To people in the United States and around the world, I am so sorry for the uranium and plutonium that Japan has released into the environment. The fallout from Fukushima has already circled the world many times, reaching Hawaii, Alaska, and even New York. We live 60 kilometers (37 miles) from the plant and our homes have been contaminated beyond levels seen at Chernobyl… But the government will not help us. They tell us to stay put… I was eight years old when the Fukushima Daiichi plant opened. If I had understood what they were building, I would have fought against it. I didn’t realize that it contained dangers that would threaten my children, my children’s children and their children. I am grateful for all the aid all the world has sent us. Now, what we ask is for you to speak out against the Japanese government. Pressure them into taking action. Tell them to make protecting children their top priority. Thank you so much.”

4 thoughts on “Fukushima Student: “It seems like we are about to get killed” — “Anyone, please, please save the lives of Fukushima people and children … Gov’t abandoned us … Japan is clearly going insane … Nothing has gotten better””