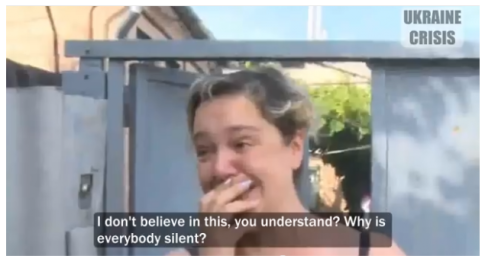 – Slavery Is Now Being Put into Practice by the Ukrainian Government (Washington’s Blog, Nov 1, 2014):

On September 26th, I headlined “Ukraine Government Officially Introduces Slavery, with Vague Terms,” and I wondered when and where the reports of the consequences of this new law (by a newly installed U.S.-ally government, no less) would be published. An answer to that question is finally starting to appear.

On October 30th was published at

“The Right Sector Reign of Terror over Ukrainian Villages.”

The motto of this site, Fort Russ, is, “Read What Russians Read.”

My original news-report, the one about the new law, was based on a press release from the Ukrainian Ministry of Social Policy (about which that Russian article regarding what are actually the consequences of this new law says nothing, not even mentioning the law).

The Fort Russ article claims to be based on interviews with family members and friends of people who have been yanked from the general Ukrainian population and been forced to become victims of this new law (though, again, that law isn’t mentioned in their article, which deals solely with accounts from the bewildered and uncomprehending victims of this law) — forced to become slaves working for the Ukrainian Government, exactly in the way which was described in that cryptic press announcement, from an obscure agency in this nazi (or racist-fascist) regime, which the Obama Administration imposed upon Ukraine in a coup by the CIA on 22 February 2014. That newly installed regime promptly made clear that it wanted the residents in the areas of Ukraine that had voted overwhelmingly for the man whom Obama had overthrown, to either die or flee, so that the Ukrainian Government could keep their land while getting rid of its anti-fascist residents, and so continue ruling Ukraine, even those cleared-out areas of it, in future nationwide Ukrainian elections. In other words: so that Obama’s regime wouldn’t be able to be thrown out by Ukraine’s electorate. Thus, the political orientation of that Government is already clear from the record of what they have been doing since they came into power. The enslavement law is part of that process, because the Ukrainian Government is bankrupt and near collapse even with the tens of billions of dollars that it has received in loans from the West after the coup (and which will now clearly never be paid back but will instead devolve upon Western taxpayers after Western arms-makers, and Ukraine’s oligarchs, will have already taken their profits and salted those in tax havens).

The process of land-clearing in their southeast has been far costlier than they or their Western sponsors had assumed it would be. (When Ukrainian President, the oligarch Petro Poroshenko, first came into office, he said that the war against the ‘terrorists’ would take “days, not months”; and he said it five months — and many billions of dollars – ago, and now has only more debts and corpses and destroyed tanks and warplanes to show for the huge and now doubled-down investment by Western taxpayers.) Slaves are one obvious way to deal with this problem; so, that’s why slavery is being introduced as official Ukrainian policy.

I had submitted the September 26th news-report to all U.S. and UK major ‘news’ media and to almost all of both countries’ ‘alternative’ news-media, including all of the well-known ones, and including both liberal and conservative news-sites. (I do that with each of my news-reports.) The only ones that published it were the usual few that publish my news-reports about U.S. policy regarding Ukraine, and about the English-language press-coverage of Ukraine, these being the following seven general news-sites:

Someone submitted that September 26th piece at reddit, but an administrator there removed it.

Investigative historian Eric Zuesse is the author, most recently, of  They’re Not Even Close: The Democratic vs. Republican Economic Records, 1910-2010,  and of  CHRIST’S VENTRILOQUISTS: The Event that Created Christianity.