Six years after QE started, and just about the time when we for the first time said that the primary consequence of QE would be unprecedented wealth and class inequality (in addition to fiat collapse, even if that particular bridge has not yet been crossed), even the central banks themselves – the very institutions that unleashed QE – are now admitting that the record wealth disparity in the world – surpassing that of the Great Depression and even pre-French revolution France – is caused by “monetary policy”, i.e., QE.

Case in point, during the Keynote speech by Yves Mersch, ECB executive board member, in Zurich on 17 October 2014 titled “Monetary policy and economic inequality” he said:

More generally, inequality is of interest to central banking discussions because monetary policy itself has distributional consequences which in turn influence the monetary transmission mechanism. For example, the impact of changes in interest rates on the consumer spending of an individual household depend crucially on that household’s overall financial position – whether it is a net debtor or a net creditor; and whether the interest rates on its assets and liabilities are fixed or variable.

Such differences have macroeconomic implications, as the economy’s overall response to policy changes will depend on the distribution of assets, debt and income across households – especially in times of crisis, when economic shocks are large and unevenly distributed. For example, by boosting – first – aggregate demand and – second – employment, monetary easing could reduce economic disparities; at the same time, if low interest rates boost the prices of financial assets while punishing savings deposits, they could lead to widening inequality.

Alas, in the past 6 years, low interest rates have not only boosted financial asset prices but have resulted in the biggest artificial asset bubble ever conceived. As for reducing unemployment, don’t ask Europe – and its unprecedented record unemployment, especially among the youth – how that is going. As for the US where unemployment is “dropping”, ask the 93.5 million Americans who have dropped out of the labor force, those whose real wages haven’t risen in the past 20 years, or the soaring part-time workers just how effective monetary policy has been in the US.

Back the Mersch’ shocking discoveries:

So what do we know about the impact of monetary policy on the distribution of wealth, income and consumption? A comprehensive study published recently by the National Bureau of Economic Research (NBER) outlines five potential channels by which more accommodative measures might affect inequality.

The first is the ‘income composition channel’: while most households rely primarily on earnings from their work, others receive larger shares of their income from business and financial income. If more expansionary monetary policy raises profits more than wages, then those with claims to ownership of firms will tend to benefit disproportionately. Since the latter also tend to be wealthier, this channel should lead to higher inequality in response to more accommodative monetary policy.

The second is the ‘financial segmentation channel’: if some individuals and organisations frequently trade in financial markets and are affected by changes in the money supply before others, then an increase in the money supply will redistribute wealth towards those most connected to markets. To the extent that households that participate actively in financial transactions typically have higher income, then this channel also implies that consumption inequality should rise after expansionary monetary policy shocks.

And here is where it gets funny, because even during its confessional, the ECB has to at least cover some of its tracks:

The NBER study outlines two further channels that tend to move inequality in the opposite direction in response to expansionary monetary policy. The first is the ‘savings redistribution channel’: lower interest rates will benefit borrowers and hurt savers. To the extent that savers are generally wealthier than borrowers, this will generate a reduction in consumption inequality.

Alas, it is completely the opposite. Because “wealthy savers” instead allocate their spare cash into equity investments, while “poor borrowers” are increasingly more shut out of the credit market. Those who aren’t, paradoxically end up paying every higher APRs on their credit card statements. It is for their benefit that neo-socialist administrations such as Obama’s has conceived such wealth-imbalance neutralizing trinkets such as Obamaphones and “free” healthcare insurance.

The second is the ‘earnings heterogeneity channel’: earnings from jobs are the primary source of income for most households and earnings for high- and low-income households may respond differently to monetary policy. This could occur, for example, if unemployment falls disproportionately on low-income groups: evidence does suggest that that labour earnings at the bottom of the distribution are most affected by business cycle fluctuations. So if monetary policy reduces unemployment, it will also reduce inequality.

Yes, it does, if only in theory. The problem is that in practice QE is only “reducing unemployment” among those 55 and older while leading to a record low labor participation rate among Americans in the prime 25-54 age group.

There are more such amusing anecdotes in the speech how in theory the central banks aim to do well, when in practice they achieve precisely the opposite, but the punchline is the following attempt by one central bank, the ECB, to scapegoat another, the Bank of Japan, for doing precisely what the ECB hopes to do soon:

One final piece of literature on monetary policy and inequality outside the euro area lies in recent research by Ayako Saiki and Jon Frost at De Nederlandsche Bank. They have examined the impact of unconventional monetary policy on the distribution of income in Japan, a country whose long history of non-standard measures makes it particularly relevant. Their results show that while aggressive monetary policy finally seems to be having the desired effect on the economy, this strong medicine has come with the unwanted side-effect of higher income inequality.

They suggest a straightforward mechanism via the portfolio channel: an increase in the monetary base (through purchases of both safe and risky assets) tends to increase asset prices. Higher asset prices benefit primarily those on higher incomes, who hold a larger amount and share of overall savings in equities, and thus benefit from greater capital income. Overall, the Bank of Japan’s unconventional policies have widened income inequality, especially after the collapse of Lehman Brothers in 2008, when quantitative easing became more aggressive.

The researchers conclude that their study holds lessons for other countries undertaking unconventional monetary policy. While preventing deflation and repairing the monetary transmission mechanism at the zero-bound is inherently a difficult undertaking, Japan’s experience provides a cautionary tale on the potential side-effects. It is possible that the portfolio channel will be even larger in the US, the UK and many euro area economies, where households hold a larger portion of their savings in equities and bonds.

So it took the smartest people in the room six years to figure out that instead of fixing the economy, their policies are in fact leading to even greater class inequality: inequality so great that Monsieur Piketty wrote a massive tome about how inequality has never been greater! And somehow, in this bizarro New Normal, Bernanke, Yellen, Draghi et al. have become the patron saints of socialists everywhere: the same group of people who should be at arms over the epic wealth redistribution central bankers have achieved: redistribution that takes from the poor and gives to the rich.

But while we are confident that even economists ultimately have a long overdue Eureka moment, what is a bigger question is why are central bankers finally starting to admit the glaringly obvious? This is a very slippery slope, because once you tell one truth, you then have to admit the second, and the third and the next.

And while we are delighted that this process will ultimately prove that everything we have warned about from the beginning will be true, a greater concern is that the social outcome which will result, once this process of pulling one’s head out of the sand of willful ignorance ends with its inevitable conclusion, will be a very violent, and very bloody one.

A process which now appears to have commenced. 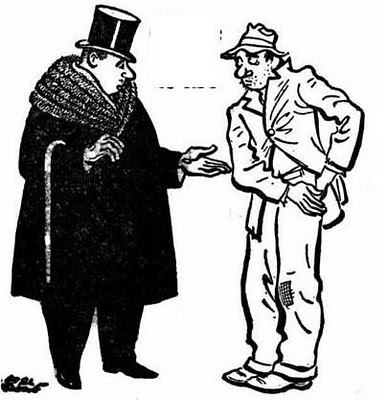