Actually, it may well be QE5, or QE6 depending on how one counts Operation Twist and the extension of QE3, but what matters is that the countdown to whatever it is, has begun courtesy of none other than one of the Fed’s biggest doves, the head of the Fed which spawned Janet Yellen, San Francisco Fed’s John Williams

This is what a happy, money-printing John Williams looks like: 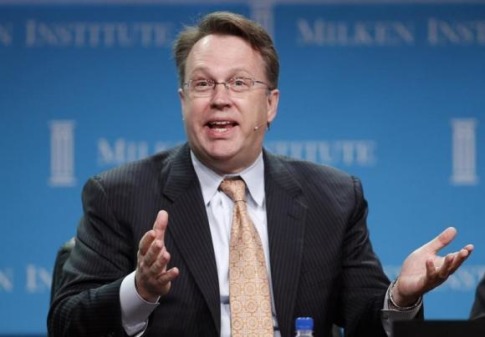 The head of the San Francisco Federal Reserve Bank on Tuesday said he would be open to another of round asset purchases if inflation trends were to fall significantly short of the U.S. central bank’s target.

Although he said it would take a big shift in the U.S. economic outlook for the Fed to restart its bond buying, John Williams said the possibility of a new downturn in Europe and other global economic woes pose a risk to the United States. “If we really get a sustained, disinflationary forecast … then I think moving back to additional asset purchases in a situation like that should be something we should seriously consider,” Williams said in an interview with Reuters.

Rinse, repeat, for round number 4 (or 5, or 6), in the process completely destroying what little is left of the middle class and making the uber super rich uberer, superer richer. Because when all is said and done, the Fed will either get runaway inflation through money printing or hyperinflation through collapse of the US reserve currency. There is now no middle ground, further compounded because the Fed has sole control of the CTRL and P buttons.

Needless to say, Williams is right and more QE is just a matter of time before the data-dependent (dependent on the data describing the drop in the S&P that is) Fed realizes that this aggression against rigged markets can not stand. What’s worse, this lunacy will continue until the US people finally go all “French revolution” on the Marriner Eccles building and give the locals the Marie Antoinette “haircut.”