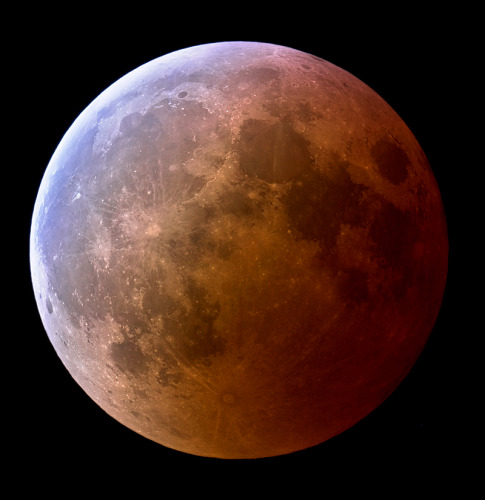 The hue of the lunar disk may seem puzzling to some readers. Shadows are supposed to be black, yet the shadowed Moon is mostly bright red. A quick trip to the Moon explains the color:

Imagine yourself standing on a dusty lunar plain looking up at the sky. Overhead hangs Earth, nightside down, completely hiding the sun behind it. The eclipse is underway. You might expect Earth seen in this way to be utterly dark, but it’s not. The rim of the planet is on fire! As you scan your eye around Earth’s circumference, you’re seeing every sunrise and every sunset in the world, all of them, all at once. This incredible light beams into the heart of Earth’s shadow, filling it with a coppery glow and transforming the Moon into a great red orb.

Red isn’t the only color, however. Sharp-eyed observers might also spot some turquoise, shown here in a photo taken by Jens Hackman during an eclipse in March of 2007:

Its source is ozone. Atmospheric scientist Richard Keen of the University of Colorado explains: “During a lunar eclipse, most of the light illuminating the moon passes through the stratosphere where it is reddened by scattering. However, light passing through the upper stratosphere penetrates the ozone layer, which absorbs red light and actually makes the passing light ray bluer.” This can be seen, he says, as a soft blue fringe around the red core of Earth’s shadow.

To catch the turquoise on Oct. 8th, he advises, “look during the first and last minutes of totality. The turquoise rim is best seen in binoculars or a small telescope.”