“The ISIS offensive for Anbar is closely linked to the ISIS campaign for the Baghdad Belts. If ISIS can consolidate its core strength in Anbar, then its reinforcements that are currently augmenting attacks in this zone will likely shift to reinforce the northern and southern Baghdad Belts and prepare to attack the capital.“

– Despite US Airstrikes, ISIS Captures Anbar City in Coordinated Offensive Ahead Of Baghdad Attacks (ZeroHedge, Oct 3, 2014):

Day after day we are told of the ongoing success of the ongoing airstrikes of an ongoing coalition of allies fighting against ISIS. However, as ISW reports, on October 2, ISIS detonated three SVBIEDs in Hit, a city between Ramadi and Haditha, targeting security checkpoints at the western and eastern entrances of the city as well as the city center. Hit is one of the few remaining areas in the Thar Thar area of Anbar Province that is not under ISIS control. Local nationals report ISIS members moving freely around the city and black flags flying over government buildings. It appears Iraq is off the grid now and all Washington eyes are focused on Syria (and its Qatari pipeline).

On October 2, ISIS detonated three SVBIEDs in Hit, a city between Ramadi and Haditha, targeting security checkpoints at the western and eastern entrances of the city as well as the city center. Hit is one of the few remaining areas in the Thar Thar area of Anbar Province that is not under ISIS control. ISIS followed this initial SVBIED wave with a ground attack and now reportedly controls between 70 and 90% of Hit. Local nationals report ISIS members moving freely around the city and black flags flying over government buildings. 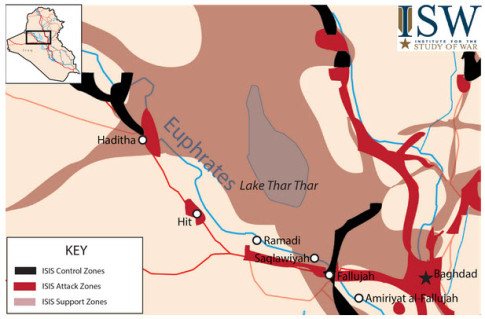 Hit occupies a strategic position along the Euphrates River Valley arm, and ISIS likely seeks to control Hit in order to counterbalance ISF control of Haditha, a city that has been highly contested between ISF and ISIS for the past several months. The attack on Hit is the latest in a series of operations that ISIS has conducted in Anbar province in order to gain freedom of movement and maneuver and to develop a secure staging area in preparation for further consolidating territory in the western Baghdad avenue of approach. Additionally, ISIS could be intensifying its effort in Anbar Province to eliminate tribal retaliatory attack planning. In the past two weeks ISIS has besieged an ISF base in Albu Aitha, north of Ramadi and overrun a second ISF position in Saqlawiyah northwest of Fallujah. ISIS persistently conducts attacks against emplaced ISF positions in the Euphrates River corridor to prevent ISF reinforcements from entering the province and to break ISF lines of communication to the outer Euphrates River belt.
ISIS’s Anbar urban offensive likely employs several different pincer movements in the outer Baghdad Belts and in the Euphrates River Valley, deliberately alternating its tactical engagements in time and space in order to keep the ISF and other adversarial forces off balance. ISIS attacks northwest of Baghdad appear to offset from ISIS attacks southwest of Baghdad, for example, and ISIS is offensives in eastern Anbar appear to offset from attacks in outer Anbar near Haditha. ISIS has been active in each of these locations over the last few weeks. ISIS tactics in the outer Anbar province also suggest ISIS commands from at least two distinct operational headquarter in Anbar. These two commands frame the Haditha-Ramadi corridor.
One headquarters element exercises control from the outer northwest Thar Thar region to middle Anbar, a block we have previously assessed to conduct attacks and provide strategic reinforcement along this corridor. The Thar Thar region that stretches from Fallujah north to Samarra is a likely stronghold for ISIS since the Abu Ghraib Prison attack in July 2013. ISIS took control of the Muthanna Complex there on June 11, 2014 – only a day after Mosul fell. The ISF have increasingly targeted villages on the southern edge of the region, such as Garma, after ISIS entered Fallujah in December 2013, but the evidence indicates that ISIS probably maintains a significant force in this zone.
The other element is likely in southwestern Anbar along the southern bank of the Euphrates near Haditha and Ana. This element is most likely responsible for attacks from far western Anbar towards the Haditha – Ramadi axis. ISIS was conducting attacks in Haditha at an almost daily rate in early September 2014. However, ISIS has been unsuccessful penetrating ISF defenses in Haditha and has shifted both logistical and operational focus farther down the Euphrates River Valley corridor. ISIS likely seeks to merge the efforts of these two Anbar elements and close the gap at Hit. If ISIS succeeds in this, it will isolate pro-government tribes that are fighting ISIS in Haditha and Ramadi from ISF reinforcements. It will also relieve ISIS elements in Anbar by diminishing the local population’s opportunity to resist. The ISIS offensive for Anbar is closely linked to the ISIS campaign for the Baghdad Belts. If ISIS can consolidate its core strength in Anbar, then its reinforcements that are currently augmenting attacks in this zone will likely shift to reinforce the northern and southern Baghdad Belts and prepare to attack the capital.