We would like to be able to commiserate with Ukraine’s US-muppet regime, we really would, but when Ukraine’s PM Argeny Yatseniuk, or Yats as he is known to Victoria Nuland, almost cried in an interview with Reuters yesterday when he pleaded that “[Russia] wants us to freeze… This is the aim and this is another trump card in Russian hands…. So, except military offense, except military operation against Ukraine, they have another trump card, which is energy”. we have just two things to say to him: i) he is absolutely correct, about Russia having the trump card that is – something obvious to everyone with half a brain from the start of the conflict, and ii) perhaps Ukraine should finally pay Gazprom not only for the gas they would like to use in the future, but also the gas they have already used and payment for which is overdue and which the IMF, i.e., the US taxpayer, gave Ukraine explicit money to pay for and instead was embezzled by the people in power. 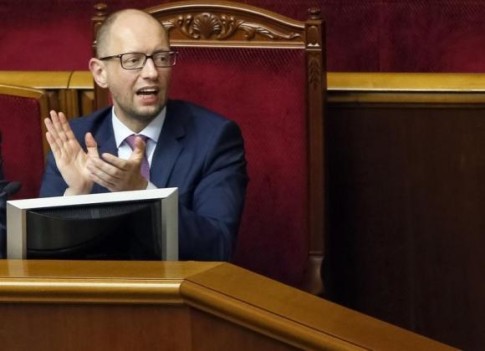 More from Reuters on how Ukraine finally, with a year’s delay, figure out just what the endgame is:

“The ultimate goal of Russia is to organize, to orchestrate another frozen conflict in Ukraine.”

Russia’s state-controlled energy company Gazprom cut off gas supplies to Ukraine in June because of a row over Kiev’s unpaid gas bill, raising concerns that the country may not be able to cover the peak-demand winter season.

The European Commission is aiming to propose an interim solution to the gas quarrel between Russia and Ukraine at talks it is brokering in Berlin on Friday.

Yatseniuk said there were no official negotiations on it, though he said a plan to help Ukraine secure additional gas “would be helpful for us.”

But while we have absolutely zero compassion for Ukraine’s puppet regime, which was used and abused by their “western partners”, and is suddenly left out to dry, or rather freeze, with an imploding economy and an increasingly more angry population, where the cherry on top will be hyperinflation to follow a very vold winter, we are indeed sad for Ukraine’s ordinary people, who are merely the innocent victims in the ongoing political power struggle between Obama and Putin, and for whom the next few months will be a living hell.

Still, we are confident they will survive: here is how the Ukrainian locals are preparing, according to Bloomberg:

Since Kiev’s authorities started turning off communal hot water supplies last month to save natural gas, people with their own boilers have found unwashed friends on the doorstep armed with a towel and a bar of soap.

Yulia Mikulska, an accountant from the Ukrainian capital, had gone weeks without a hot shower before she visited her brother’s summer house, which is fitted with an electric water heater. “I finally got to wash myself like a human being!” the elegant 38-year-old said.

Ukrainians are resorting to “wash visits” along with school closures and DIY insulation as the nation of 45 million braces for a winter without enough gas. Authorities, already fighting an insurgency in the east, are scrambling to build stockpiles in a country where temperatures can drop to 20 below zero Celsius (negative 4 degrees Fahrenheit) after Russia, the main supplier, stopped shipments in June.

An early winter in Ukraine means the locals will literally have to warm themselves for the next two months:

Kievenergo, which provides heat for the capital, said it may delay supplying customers until the start of November, when average temperatures are near zero, and stop at the end of March. By providing heat for one month less than usual, it will save 5.5 million cubic meters of gas a day.

The Kiev power authority has a modest proposal to the locals: chill. Literally.

Homes will have to be kept cooler, with the thermostat set at 19 degrees Celsius, 5 degrees lower than usual, according to Naftogaz Chief Executive Officer Andriy Kobolyev. Authorities have also warned of power cuts.

Another side effect: students will be dumber, something the “Western alliance” will surely welcome:

In the western Ukrainian city of Lviv, schools will likely close during the coldest months because there’s not enough fuel to heat them. The city has introduced a 6-day week and canceled vacations in October and March to make up the time.

Oleksandr Poltoratskyi, director of an elementary school with 700 pupils in Kiev, decided to forgo a plan to buy laptops and spent the money on a boiler instead. “That way we’ll be sure to have hot water for the kids, even if there’s rationing,” he said.

the biggest irony is that in desperately seeking to avoid becoming part of the new USSR, the Ukraine energy company what few customers it has left to, well, revert to the practices from the old USSR:

Naftogaz’s Kobolyev advised households to revert to frugal practices from Soviet times. They should glue strips of paper to the inside of window frames to keep warm air in, he told weekly newspaper Dzerkalo Tyzhnya. Kharkiv’s city council has called on residents to volunteer to help insulate apartment buildings and pay for the repairs out of their own pockets.

Mikulska, the accountant who showered at her brother’s place, said that installing a boiler is too expensive so she’s been heating up water in an electric tea kettle to wash herself and her 9-year-old daughter. She managed to color her hair using a kettle to rinse out the dye. If there’s a power cut, she says she won’t have any heat at all.

“Imagine washing your child if there’s no heating,” she said. “Now that there’s some sun we can dry things, but later, if our heaters are cold, what are we going to do?”

Well, one thing you can do is go to the parliament, and protest, demanding a change in the government – one which actually prioritizes the best interests of its own people, not those of some burecrats a few thousand miles away. After all isn’t that what got Ukraine in this sorded situation in the first place?

5 thoughts on “Ukraine PM Cries “Russia Wants Us To Freeze” As Locals Prepare For A Long, Cold Winter”