Whether because eaters around the world and in the US would rather eat even fattier, more expensive, more calorific equivalents such as MCD-spinoff Chipotle, or because the global consumer/eater can not even afford the cheapest form of a dollar meal, is unknown, but what is quite clear is that the company which was once the bellwether of the US commodity eater, McDonalds, just reported global comp store sales which saw a decline of -3.7% from a year ago, its worst monthly print in a decade!

This was driven in big part by the US where comparable sales declined by 2.8% in August and have not posted a positive monthly print since December, but mostly due to Asia where as a result of the ongoing fast-food scare, comp store sales cratered by a record 14.5%. If indeed this is part of a secular shift away from made in the US fast food, and if this too is as a result of an Edwards Snowden-predicated backlash against all that is US, then Asians truly owe the NSA whistleblower: they just added some 10 years to their average life expectancy. 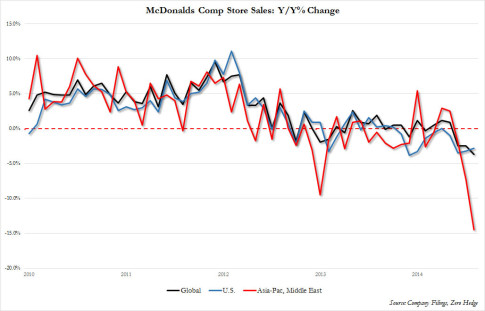