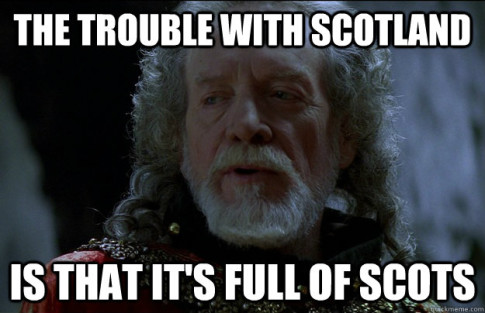 The latest opinion poll put the pro-independence movement in the lead for the first time, with 51 percent voicing their support just 11 days before the referendum on the issue. Prime Minister Cameron and Queen Elizabeth II expressed their concern.

The poll was conducted by YouGov and The Sunday Times. The two-point lead has a margin of error, but the chances of a vote in favor have significantly grown, in particular because the 49 percent that chose “No” include undecided voters.

Another poll, commissioned by the “Yes” camp gives “No” 52 percent. The “Yes” camp leader, Blair Jenkins demanded that his side remain focused, stating that the latest YouGov poll puts them “marginally ahead,” but other polls demonstrate there is “more progress to make if we are to win.”

The Better Together campaign – against independence – has been leading the polls for a while: just a month ago, the lead was 22 percent in a YouGov poll. On Tuesday, the lead narrowed to 6 percent, AFP reported.

Alistair Darling, the campaign leader, said the vote “will go down to the wire,” and declared, “It is not the Battle of Britain — it is the battle for Scotland, for Scotland’s children and grandchildren and the generations to come. This is a battle we will win.”

The latest YouGov/Sunday Times poll also demonstrated that pro-union campaigners are less trusted than the movement in favor of independence.

Exciting times but let’s put everything we’ve got into persuading others to #VoteYes in the only poll that counts pic.twitter.com/qnncWLNs5l

Queen Elizabeth expressed “a great deal of concern” over the independence referendum and requested daily updates on the matter, The Sunday Times reported.

The UK’s main political parties are currently expected to disclose their plans to hand more powers to the Scottish leadership, and Scottish National Party (SNP) in particular.

Notably, the UK government will reveal plans in the coming days that would give Scotland more autonomy on tax, spending and welfare, should Scotland decide to remain within the UK, British Finance Minister George Osborne said.

“You will see in the next few days a plan of action to give more powers to Scotland… Then Scotland will have the best of both worlds. They will both avoid the risks of separation but have more control over their own destiny, which is where I think many Scots want to be,” Osborne told the BBC on Sunday.

“More tax-raising powers, much greater fiscal autonomy … more control over public expenditure, more control over welfare rates and a host of other changes,” he said, adding that the measures were being agreed by all three major parties in the parliament.

On Sunday, Cameron is set to visit the Queen to discuss the issue – a visit arranged before the poll results had been announced.

On September 15, the UK prime minister is to give a final speech, urging the Scots to stay within the UK and have “the best of both worlds.”

The PM could be forced to stand down, should the “Yes” camp win the referendum, The Sunday Times reported – despite Cameron insisting on Thursday that this wouldn’t happen.

Cameron’s Conservatives are unpopular in Scotland, with only one lawmaker in the House of Commons out of 59 Scottish seats there.

The referendum is set to take place on September 18. Scotland constitutes one third of the UK’s territory, and hosts Britain’s Trident nuclear deterrent.