“Far away from Congress is the real forgotten man, the taxpayer who foots the bill… For if human liberty is to survive in America, we must win the battle to restore honest money.”

“the paper money disease here may take many years to run its course…but when that day arrives, our political rulers will probably find that foreign war and ruthless regimentation is the cunning alternative to domestic strife.”

Warren Buffett has famously supported the Obama administration and other Democrats, even lending his name to the so-called “Buffett Rule,” which calls for raising income taxes on high earners. As such, it may surprise you to learn that a key person in Warren Buffett’s life was an ardent proponent of political views diametrically opposed to those of the “Oracle of Omaha.”

111 years ago today, Warren’s father Howard Homan Buffett was born in Omaha, Nebraska. Buffett, like his son Warren, worked in the investment business, but also served four terms in the U.S. House of Representatives from 1943-1949 and then again from 1951-1953, as an anti-New Dealer, anti-Fair Dealer and overall anti-interventionist of the Republican “Old Right.” Politically, it could be said that Buffett was the Ron Paul of his day.

Buffett even corresponded with leading libertarian Murray Rothbard, asking Rothbard in one letter where he might be able to procure a copy of his “The Panic of 1819,” so that he could pass it along to his son. 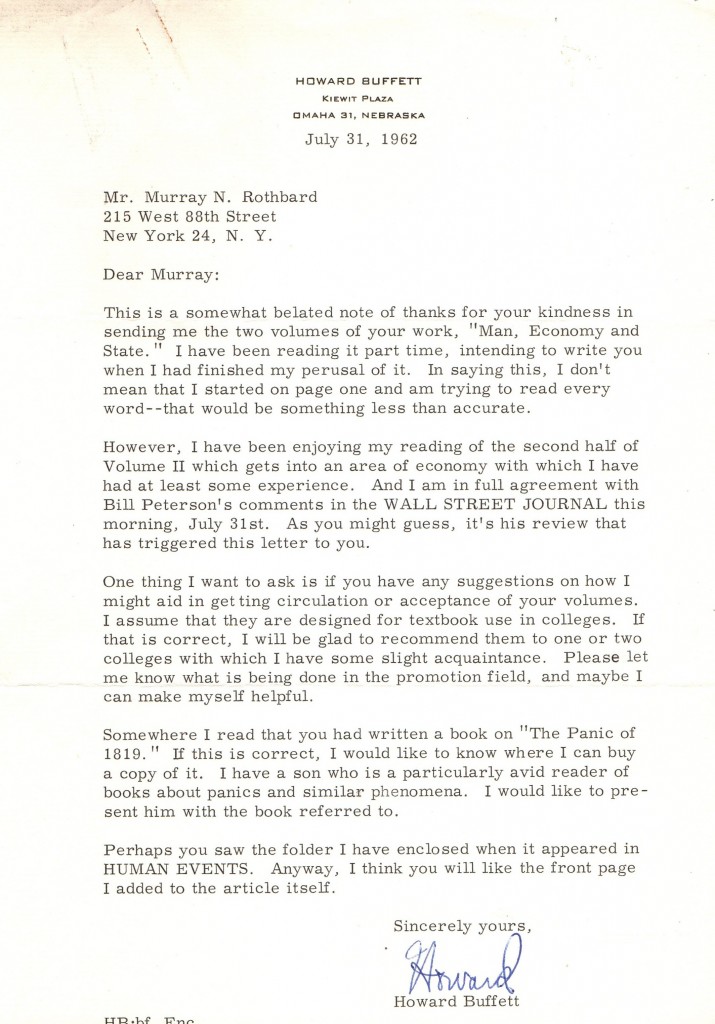 Unlike his son who has lauded the Federal Reserve and in particular its former chairman Ben Bernanke, along with others who intervened during and after the financial crisis of 2008, Howard Buffett was an outspoken proponent of laissez-faire economics and sound money. In a 1948 article he wrote:

Is there a connection between Human Freedom and A Gold Redeemable Money? At first glance it would seem that money belongs to the world of economics and human freedom to the political sphere.

But when you recall that one of the first moves by Lenin, Mussolini and Hitler was to outlaw individual ownership of gold, you begin to sense that there may be some connection between money, redeemable in gold, and the rare prize known as human liberty.

Also, when you find that Lenin declared and demonstrated that a sure way to overturn the existing social order and bring about communism was by printing press paper money, then again you are impressed with the possibility of a relationship between a gold-backed money and human freedom…

Under such conditions [of depreciating currency] the individual citizen is deprived of freedom of movement. He is prevented from laying away purchasing power for the future. He becomes dependent upon the goodwill of the politicians for his daily bread. Unless he lives on land that will sustain him, freedom for him does not exist…

Buffett argues that the lack of a gold standard meant that Congress was unrestrained in spending money to cater to various interest groups, stating “With no bad immediate consequence it becomes expedient to accede to a spending demand. The Treasury is seemingly inexhaustible. Besides the unorganized taxpayers back home may not notice this particular expenditure — and so it goes.” Further:

Far away from Congress is the real forgotten man, the taxpayer who foots the bill. He is in a different spot from the tax-eater or the business that makes millions from spending schemes. He cannot afford to spend his time trying to oppose Federal expenditures. He has to earn his own living and carry the burden of taxes as well.

But for most beneficiaries a Federal paycheck soon becomes vital in his life. He usually will spend his full energies if necessary to hang onto this income.

The taxpayer is completely outmatched in such an unequal contest. Always heretofore he possessed an equalizer. If government finances weren’t run according to his idea of soundness he had an individual right to protect himself by obtaining gold.

With a restoration of the gold standard, Congress would have to again resist handouts. That would work this way. If Congress seemed receptive to reckless spending schemes, depositors’ demands over the country for gold would soon become serious. That alarm in turn would quickly be reflected in the halls of Congress. The legislators would learn from the banks back home and from the Treasury officials that confidence in the Treasury was endangered.

Congress would be forced to confront spending demands with firmness. The gold standard acted as a silent watchdog to prevent unlimited public spending.

Buffett ends his column with this warning:

Because of our economic strength the paper money disease here may take many years to run its course.

But we can be approaching the critical stage. When that day arrives, our political rulers will probably find that foreign war and ruthless regimentation is the cunning alternative to domestic strife. That was the way out for the paper-money economy of Hitler and others. In these remarks I have only touched the high points of this problem. I hope that I have given you enough information to challenge you to make a serious study of it.

I warn you that politicians of both parties will oppose the restoration of gold, although they may outwardly seemingly favor it. Also those elements here and abroad who are getting rich from the continued American inflation will oppose a return to sound money. You must be prepared to meet their opposition intelligently and vigorously. They have had 15 years of unbroken victory.

But, unless you are willing to surrender your children and your country to galloping inflation, war and slavery, then this cause demands your support. For if human liberty is to survive in America, we must win the battle to restore honest money.

There is no more important challenge facing us than this issue — the restoration of your freedom to secure gold in exchange for the fruits of your labors.

We’ll leave it to you to judge the merits of Buffett’s words.

1 thought on “Warren Buffett’s Dad Was Right (About Everything)”