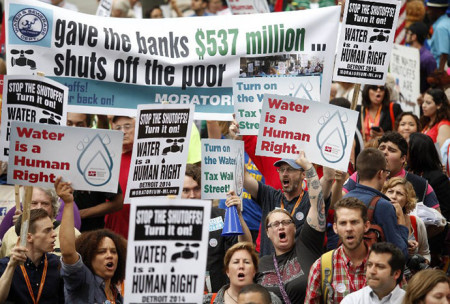 Hundreds of demonstrators paraded through Detroit, protesting the city’s decision to terminate water supplies to thousands of residents with delinquent accounts.

“Fight, fight; water is a human right,” the protesters chanted as they marched the city on Friday. Media estimated their number at 300-1,000 people.

The protest was organized by the group National Nurses United, which says the termination of water supplies, in the middle of summer, could turn into a public health emergency. The group’s co-president, Jean Ross, called the shutoffs an “attack on the basic human right of access to safe, clean water.”

“What’s happening here is inhumane,” Ross told WWJ news radio. “We know that you need water to sustain yourself and no one, no one should shut off the water to the people.”

Detroit Must Stop Shutting Off Water To People Who Cannot Afford To Pay http://t.co/VpJP2EXKeS http://t.co/zz66i9B0mH #DetroitWater

Between March and June, the Detroit Water and Sewerage Department suspended service to 15,200 customers, Greg Eno, a department spokesman, told the New York Times. About another 92,000 customers, who are at least 60 days late on their utility bill or more than $150 behind remain at risk of losing water supplies.

This week, Steven W. Rhodes, the federal bankruptcy judge handling the case, said the situation was damaging Detroit’s reputation and called on city leaders to better handle it.

In a statement released on Friday, however, Kevyn D. Orr, the city’s emergency manager, said that of the accounts where water was suspended, more than half were made current within 24 hours, and service was restored. He said that assistance was available for customers with “demonstrated financial need.”

In March, about half the department’s customers, including businesses, had outstanding balances, amounting to $118 million in charges, the department said.

“Water should be available to everybody,” Conyers told ABC Detroit. “It shouldn’t be something that only people who can afford it can get.”

Williams said turning off the tap on citizens’ homes proves that “there’s something wrong in America.”

“Right now in a household there is child thirsty who cannot have a drink,” Williams said. “Right now there is an elderly person who is ill that needs fresh water. There [are] children waiting to take a fresh bath and have clean water to drink.”