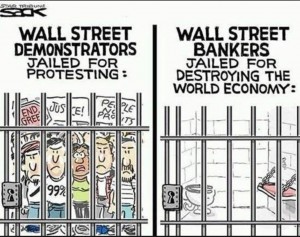 Want to hear the worst idea in the history of horrible ideas? How about we take the industry responsible for destroying the U.S. economy and wrecking the lives of tens of millions of people, and then allow it to create a “government-industry cyber war council.”

It appears that trillions in taxpayer bailouts simply wasn’t enough for Wall Street. Noting that it can seemingly get whatever it wants whenever it wants, the industry is now positioning itself to overtly control U.S. “cyber” policy. What could go wrong?

The man behind the push appears to be ex-NSA chief Keith Alexander, who as I reported on last month, is now: Pimping Advice to Wall Street Banks for $1 Million a Month. As I mentioned in that post, one of Mr. Alexander’s most high profile clients is Wall Street’s largest lobbying group the Securities Industry and Financial Markets Association (SIFMA). Unsurprisingly, SIFMA is behind the latest push to formally merge Wall Street with the government intelligence apparatus. Mr. Alexander isn’t wasting any time.

Wall Street’s biggest trade group has proposed a government-industry cyber war council to stave off terrorist attacks that could trigger financial panic by temporarily wiping out account balances, according to an internal document.

The proposal by the Securities Industry and Financial Markets Association, known as Sifma, calls for a committee of executives and deputy-level representatives from at least eight U.S. agencies including the Treasury Department, the National Security Agency and the Department of Homeland Security, all led by a senior White House official.

More centralization. This is the exact opposite of what we want or need. The establishment is very worried about the trend toward decentralization, and making its move on many fronts.

The trade association also reveals in the document that Sifma has retained former NSA director Keith Alexander to “facilitate” the joint effort with the government. Alexander, in turn, has brought in Michael Chertoff, the former U.S. Secretary of Homeland Security, and his firm, Chertoff Group.

Ah, Michael Chertoff again. One of the most shameless government cronies out there. His relentless desire to profit from the “war on terror” is one of the main reasons we have installed those useless naked body scanners at airports across the country. Recall I covered this in my post, License Plate Readers Stir Controversy in California as the NYPD Prepares to Use Drones, in which I noted:

Forrmer head of the Department of Homeland Security (DHS), Michael Chertoff, has a private security company called the Chertoff Group, which stands to make lots of money from fear mongering the public about terrorism. As the Huffington Post reported in 2010:

Chertoff’s clients have prospered in the last two years, largely through lucrative government contracts, and The Chertoff Group’s assistance in navigating the complex federal procurement bureaucracy is in high demand. One example involves the company at the heart of the recent uproar over intrusive airport security procedures – Rapiscan, which makes the so-called body scanners. Back in 2005, Chertoff was promoting the technology and Homeland Security placed the government’s first order, buying five Rapiscan scanners.

Moving back to today’s Bloomberg article…

Alexander had been pitching Sifma and other bank trade associations to purchase his services through his new consulting firm, IronNet Cybersecurity Inc., for as much as $1 million per month, according to two people briefed on the talks.

He has made much the same argument to Sifma as the association is now making to the government about the emergence of new kinds of software assaults. For several months beginning in fall 2012, major U.S. bank websites were hit by what is known as distributed denial-of-service attacks, in which hackers flood systems with information to shut them down.

The government-industry group would develop plans for “much quicker, near real-time” dissemination of information from agencies to the private sector and ways to “actively defend the industry” if preparations for a cyber attack are discovered in advance. Sifma is also seeking “pre-discussed and mutually understood protocols” for the industry to request government help during and after an attack.

Representative Alan Grayson, a Florida Democrat, said today he was concerned that industry members in such a joint group could improperly get involved in pre-emptive strikes against a person or state planning an assault on the U.S.

Or they could get involved in strikes against U.S. citizens they find undesirable or problematic.

“This could in effect make the banks part of what would begin to look like a war council,” Grayson said in an e-mail. “Congress needs to keep an eye on what something like this could mean.”

The Senate Intelligence Committee plans today to take up a bipartisan bill — sponsored by Senators Dianne Feinstein, a California Democrat, and Saxby Chambliss, a Georgia Republican – – aimed at improving private-sector cyber-defenses. The bill includes rules that would insulate banks from liability arising from sharing information for cybersecurity, addressing a point financial institutions have raised in the past.

Naturally, Dianne Feinstein, one of Congress’ most dangerous and authoritarian members is behind this travesty.

As I said in the beginning, this is one of the worst ideas of all-time. Two of the most powerful, out of control and corrupt segments of American society, Wall Street and the intelligence community, want to formally merge in order to better protect their power structure in a “public-private partnership.” As I noted on twitter the other day:

Although these partnerships are always a concern, this particular partnership is as dangerous as you get.